Railway police personnel and other officials were seen making futile attempts to control the surge of passengers at the stations, mainly in the Eastern Railway's Sealdah and Howrah divisions. 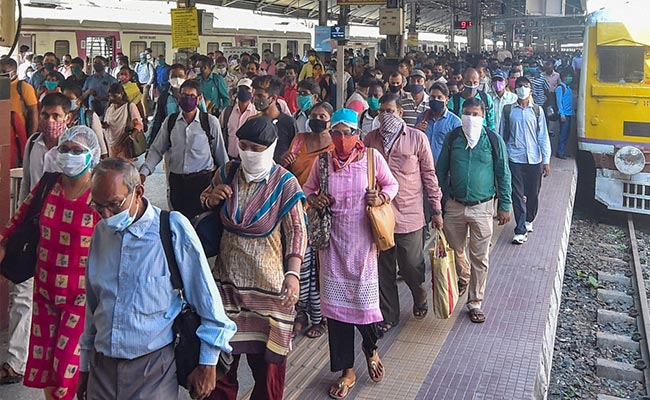 Passengers crowded local trains during the peak hours this morning - the second day after suburban railway services resumed in Bengal - with little or no regard for COVID-19 safety protocols.

Several of them demanded that the frequency of trains be increased to avoid the rush.

Chief Minister Mamata Banerjee had also urged railway authorities on Wednesday to run more trains to ensure that people do not jostle to board the rakes.

Railway police personnel and other officials were seen making futile attempts to control the surge of passengers at the stations, mainly in the Eastern Railway's Sealdah and Howrah divisions.

The situation was slightly better in the Howrah-Kharagpur section of the South Eastern Railway on Thursday, with trains being comparatively less congested.

Long queues to buy tickets, with some extending way outside the station premises, were witnessed since early morning at various places including Sonarpur, Baruipur, Mallickpur, Sodepur, Barrackpore, Serampore, Naihati.

Throwing caution to the air, passengers shoved each other as they boarded or disembarked the crammed compartments.

In many trains, commuters occupied seats, which have stickers marked on them asking people not to use them.

The Eastern Railway has said that it would be operating 615 locals daily in its two divisions, while SER would be running 81 services as of now.

"We are running 84 per cent of the total number of the trains mentioned in the time table during the peak hours for the convenience of passengers," an ER official said.