After Kolkata Bridge Collapse, 7 Bridges Identified As "Most Vulnerable" 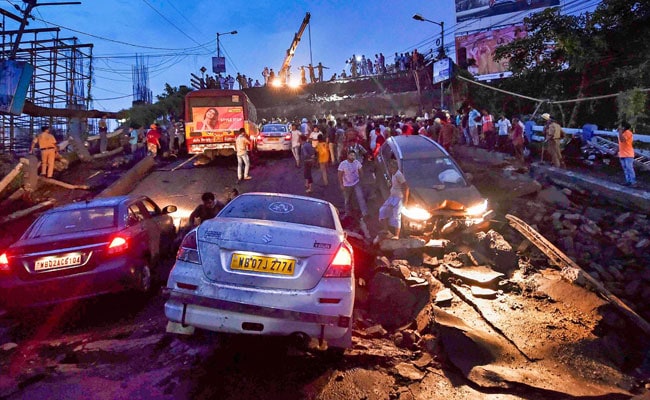 The seven bridges are among the 20, which have been classified as "distressed" structures.

In the wake of the Majerhat bridge collapse on September 4, the West Bengal public works department (PWD) has identified seven bridges in the city as "most vulnerable" requiring urgent repairs, a senior official of the department said.

The seven bridges are among the 20, which have been classified as "distressed" structures by the public works department.

"Load-bearing capacities of these bridges were carried out and depending on that report, we have suggested to the police to impose restriction on goods-carrying vehicles to prevent further deterioration of the condition of the distressed structures," he said.

The Kolkata Police has already banned movement of all goods vehicles on the first four bridges and is exploring the possibility whether a similar decision can be taken for the remaining ones, a senior officer of Kolkata Traffic Police said.

But, overloaded vehicles are still plying on the bridges, especially at night, leading to traffic snarls following which the trucks are stranded on the structures which might lead to another mishap, the PWD official said.

The PWD is preparing a detailed budget and a plan for immediately taking up the repair work of the seven bridges, the official said.

The department is also carrying out inspection of the remaining 13 bridges, including Dhakuria bridge, Tallah bridge, Sukanta Setu and Santragachchi bridge, following which they will either be labelled as "vulnerable or relatively safe".

"Inspection is being carried to test the load-bearing capacity of Dhakuria bridge and Tallah bridge so that a decision can be taken on the type of vehicles whose movement may be restricted," the PWD official said.

A team of officials from the state PWD department has carried out separate surveys at Sukanta Setu connecting Jadavpur with Santoshpur and at the Karunamoyee bridge linking Tollygunge to Haridevpur.

"Sukanta Setu has developed cracks in some places and requires repair work. But there is a need of a survey of the structure to ascertain the extent of damage," he said.

Talking about the Santragachhi bridge, the PWD official said that "poor condition" of the bridge was a cause of worry.

"Santragachhi bridge is a vital bridge but a recent survey suggests that it requires immediate repair on urgent basis. We think we must have a separate plan for Santragachhi bridge because it is used by several hundreds of trucks bringing in supply to the city and the suburbs," he said. Talking about the Sealdah bridge, the PWD official said that the government was working on options for shifting the shopkeepers to some other locations before starting "immediate" restoration work there.

"Sealdah bridge is a crucial one in the city which also immediately requires urgent repairs. But markets and shops need to be shifted first before we start carrying out the renovation and restoration works," the official pointed out.

Talking about the budget for carrying out the repair works at these bridges, the official hinted that it could run into several crores because the restoration work would differ from bridge to bridge.
After estimating the cost, the state government would float tender and it would be done in "a very short time," the official added.

On whether the bridges were maintained properly or there were lapses on part of the government, the official said, "People have forgotten that bridges have a shelf life and require regular monitoring apart from auditing and maintenance. But these critical parts were ignored and hence bridges have reached such a structurally distressed state."

Three persons were killed while 24 others injured in the September 4 collapse of a portion of Majerhat bridge, which connects the city centre with the heavily populated Behala, vast areas of the south west suburbs and neighbouring South 24 Parganas district.