Fans of Brazil and Argentina in Kerala religiously follow the football season and celebrate the World Cup. 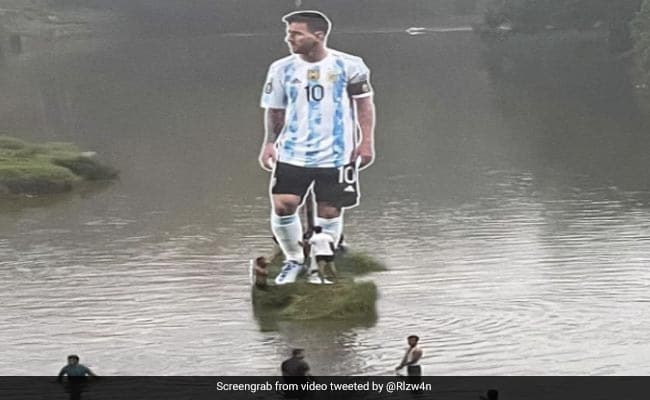 Kerala is known for its craze for football.

A Muslim body in Kerala on Friday came out against soccer-crazy youth in the state, who have erected cutouts of star-players in support of their teams participating in the ongoing World Cup by saying worshipping football celebrities is against Islam and urged them to not wave flags of Portugal which had colonised many countries.

Nasar Faizy Koodathayi, general secretary of the Qutba committee under the Samastha Kerala Jam-Iyyathul Ulama, expressed concern over football fans spending so much money on the cutouts of Argentina's Lionel Messi, Portugal's Cristiano Ronaldo and Neymar Jr of Brazil.

He lamented that students were losing interest in studies due to the games in Qatar.

"It is not right to wave the flag of Portugal which colonised many countries," the cleric said, adding that it was not right for Indians to respect and wave the flags of other nations.

Nasar Koodathayi said he, however, was not against football.

"The game should be seen in a sportsman's spirit. Football is becoming a fever people are getting addicted to. This is not good," Mr Koodathayi said.

According to him, the sport should be promoted only as a game which encourages physical activity.

"Instead, football has become a fever and fans are engaged in worshipping sport-stars. Today, people are respecting and waving the flags of other nations over their own," he said.

"Instead of loving our nation, some are engaged in worshipping football stars. There is a limit to worshipping people, when it comes to Islam. Also, people are waving Portugal flags...A country which colonised many countries...," he said.

Mr Sivankutty said no one has the right to encroach upon another's.

"People becoming fans of football legends and worshipping them are part of their personal freedom. No one has the right to encroach upon that freedom. A person can decide whether he needs to watch the match or not, listen to music or not, read a book or not... it's their choice. Our Constitution has given us all the freedom. No one can ban that," Sivankutty said.

He said if the intention of the organisation was to create awareness, it can. "But, people, too, have the right to decide whether to accept that or not," he said.

Muneer said football is a game enjoyed not only by students but also elders.

"Not only students but also elders watch and follow football with fervour. About what was said by Samsatha, you should ask them," Muneer told reporters when asked about the Muslim body's opinion on football-crazy fans in the State.

Kerala is known for its craze for football.

Fans of Brazil and Argentina religiously follow the football season and celebrate the World Cup.

Police said they have registered many cases against fans fighting over the sport across the State.