The racket was exposed when Customs arrested a man in connection with the seizure of gold worth over Rs 15 crore from a "diplomatic baggage" at Thiruvananthapuram airport. 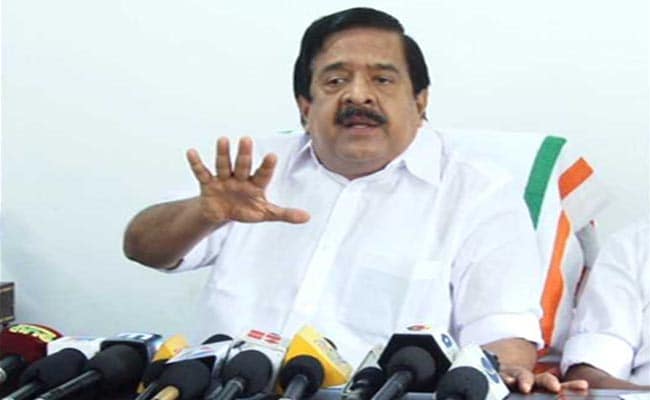 The Leader of Opposition in the Kerala Assembly Ramesh Chennithala on Tuesday wrote to Prime Minister Narendra Modi, seeking CBI probe into the alleged "influence of the smuggling cartel" at the office of Chief Minister of Kerala.

The opposition has been up in arms against the ruling Left in the state over the recent seizure of gold over 30 kg from the International Airport during an attempted smuggling into the state through diplomatic baggage.

Mr Chennithala in his letter said on July 4, the Customs authorities at Thiruvananthapuram seized gold worth "Rs 30 crore illegally brought to our country" from a consignment addressed to the "UAE consulate".

Mr Chennithala said a former employee of the consulate was arrested in connection with the case and a woman is allegedly the kingpin of the racket.

She was employed till yesterday (July 6, 2020) as Operations Manager with Kerala State Information Technology Infrastructure Limited, under Kerala Government's IT department "and is suspected to be the mastermind in the smuggling. She is missing and currently the Customs Department has launched a search for her," he said.

Earlier in the day, the Chief Minister's Office (CMO) said M Sivasankar has been removed as Secretary to the chief minister and has been replaced by Mir Mohammed, another IAS officer, who will hold additional charge.

Mr Chennithala also stated that the UAE government, in an official communique, had condemned the misuse of diplomatic channels of their consulate and stated that its mission and diplomatic staff have no role in it.

"The issue of misusing diplomatic channels is a violation of the clauses of the Geneva Convention of the UN which grants immunity to diplomatic baggage," Mr Chennithala alleged seeking a CBI inquiry.

Citing media reports, he said the "influence of the smuggling cartel" at the "office of Chief Minister of Kerala" and the nexus between politicians, government officials and the smugglers points to a "grave situation" warranting an investigation by an agency which has authority and freedom to act impartially.

Meanwhile, the Congress and the BJP lashed out at Chief Minister Pinarayi Vijayan over the gold seizure, saying he was looking for scapegoats in the matter.

"He was trying to protect the IT Secretary but when he was sure that the probe would reach the his office, he made a scapegoat out of M Sivasankar. The chief minister cannot avoid the responsibility. He cannot solve this crisis just by removing someone else in the department," mr Chennithala said.

These comments came as Kerala IT Secretary M Sivasankar was removed from his post, in the backdrop of the gold smuggling controversy, where the role of a former woman employee of the IT department is being probed.

BJP chief K Surendran, who met the media at Kozhikode, claimed many CPI(M) leaders have good rapport with the woman against whom an investigation is on.

Mr Surendran alleged that the woman was known to the chief minister since September 2017 when she played a major role in organising some five-day programmes in connection with the visit of a Sharjah sheik.

The racket came to light when the Customs on Monday arrested a man, who claimed himself to be a former employee of a foreign country's consulate in Kerala, in connection with the seizure of gold worth over Rs 15 crore from a "diplomatic baggage" at the Thiruvananthapuram airport.

The Customs has said it suspected a smuggling syndicate had misused the name of a person who enjoys diplomatic immunity.

Customs personnel have said they were looking for a woman, also claiming herself to be a former employee of the consulate in Thiruvananthapuram, in connection with the case.