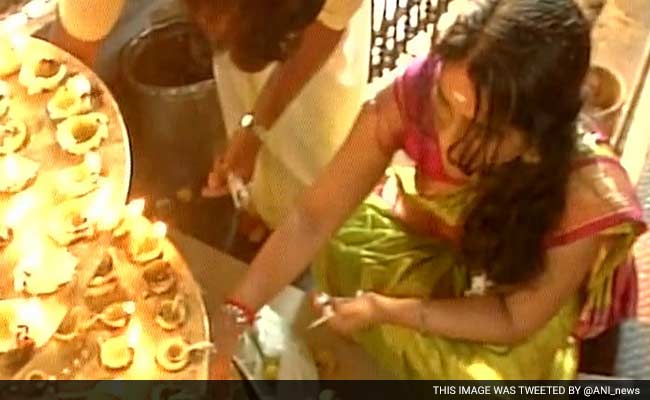 Vishu being celebrated in Trivandrum, Kerala; signifying the beginning of the Hindu New Year.

Thiruvananthapuram: Hindus in Kerala today celebrated the traditional new year "Vishu", with many thousands thronging temples across the state.

The festival, believed to herald good luck and fortune, is a public holiday in the state.

Big crowds were witnessed at all major temples such as the Sabarimala temple, the Guruvayur Sri Krishna temple and the capital's Padmanabhaswamy temple.

Most women were dressed in the traditional "kasuvu" saree (overall white with golden border) and men in dhoti.

One of the main attractions of the festival is households observing "Vishukani", a ritual where people view their favourite deity the first thing in the morning.

Preparations for Vishukani begin the night before with auspicious items like rice, grains, cucumber, pumpkin, coconut, mangoes, betel leaves and a metal vessel kept in the worship room along with a mirror.

The young and the old view all this after waking up. The elders give away money to children.

Many families consuming a 26-course Vishu lunch served on a plantain leaf. While this is mainly vegetarian in central and southern districts of the state, it is non-vegetarian in the northern districts.
Comments
VishuKerala New YearHindu New Year