Police have recorded the girl's statement before a magistrate (Representational)

A 19-year-old student of a Kerala polytechnic institute was arrested on Tuesday for allegedly raping his 18-year-old classmate and compelling her to convert to Islam. Kozhikode police arrested Mohammed Jasim under charges of rape, extortion and criminal intimidation, as well as deliberate and malicious acts intended to outrage religious sentiments by insulting a religion or its beliefs. According to the girl, who was involved in a two-year relationship with the accused, he had compelled her to convert if she wanted to marry. The girl is a Christian.

"They were classmates and in a relationship for two years. However, according to the girl's statement, the boy insisted she convert to Islam if she wanted the marriage to happen," AK Jamaludheen, Deputy Commissioner of Police told NDTV, adding, "The complaint was received a month ago. The case was filed".

Police have confirmed the girl's statement has been recorded before a magistrate.

The accused will be presented in court today.

"The spate of organised religious conversions and using the victims for terror activities by trapping tem through 'love jihad' has shown that the Christian community is a soft target for Islamic radicals," he said.

"The National Commission for Minorities is in receipt of complaints from two Christian families. In one incident that took place in Kerala's Kozhikode, a Christian college student was allegedly raped after making her drink juice laced with sedatives," his letter said. 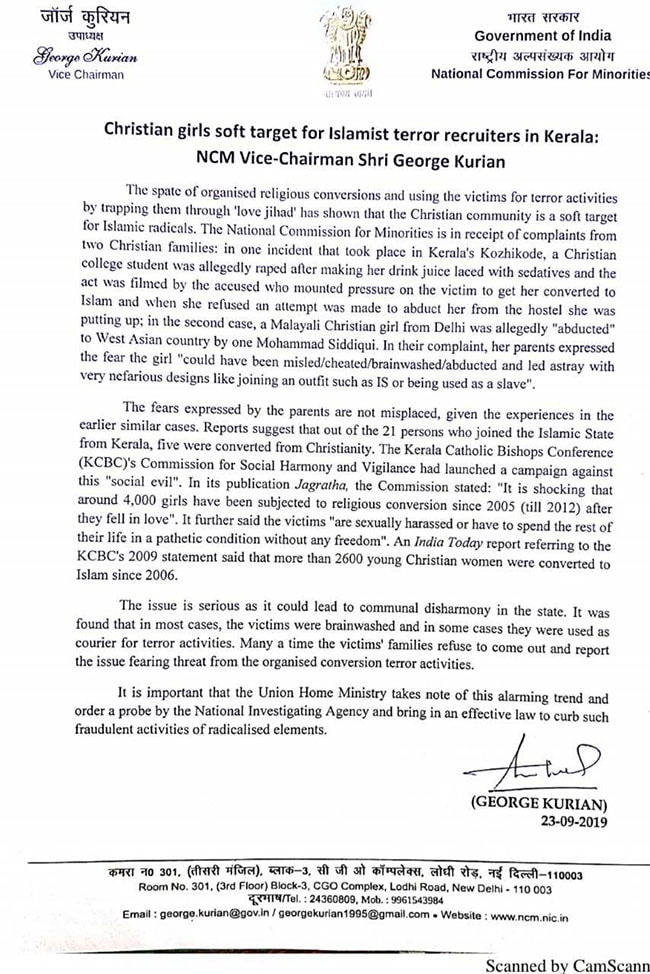 "The act was filmed by the accused who mounted pressure on the victim to get her to convert to Islam and when she refused (an) attempt was made to abduct her from the hostel she was putting up in," the letter continued.

The ruling Left Democratic Front (LDF) government in Kerala has rejected these allegations and criticised the NCM for being part of a "politically motivated campaign".

"Love Jihad is a terminology used by Hindu fundamentalists. If National Commission for Minority has used this term, it means theirs is a political statement...there is a politically motivated campaign going on in our country," A Vijayaraghavan, the LDF convenor told NDTV.

The father of the 18-year-old girl who has alleged rape told the NCM "not just my daughter but many more have been, and will be, trapped".

"I fear that this is not just a blackmailing case and that the roots go far and beyond to the Islamic terror groups," he said, while demanding that Chief Minister Pinarayi Vijayan's government turn the case over to the NIA because state police are not doing justice to the investigation.

The second complaint referred to in the letter involves a Malayali Christian girl from Delhi was allegedly abducted by a Mohammad Siddiqui. The girl's parents had expressed concerns their daughter had been "misled/cheated/brainwashed/abducted and led astray with nefarious designs like joining outfits like ISIS or being used as a slave".