Rudrappa was riding his motorcycle in Davangere, about 260 km from Bengaluru, when traffic cops suspected he was drunk and asked him to stop 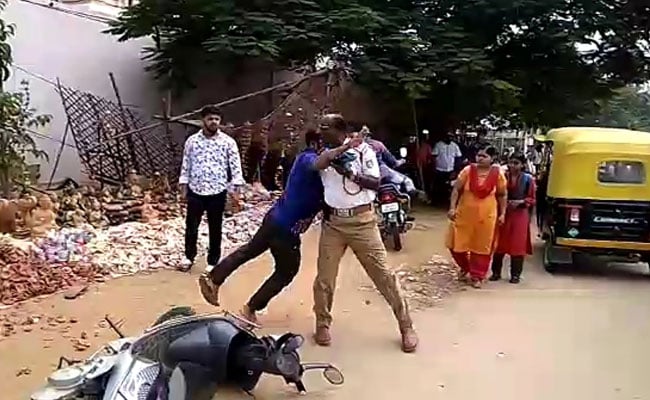 Rudrappa assaulted the cops with clay pots that left one of them bleeding.

A lawyer, allegedly drunk, thrashed two traffic cops who asked him to stop for a breathalyser test in Karnataka. The incident was caught on cellphones. Rudrappa was riding his motorcycle in Davangere, about 260 km from Bengaluru, when traffic cops suspected he was drunk and asked him to stop.

An infuriated Rudrappa picked up terracotta objects from small shops on the side of the road and began assaulting the cops. One of the cops suffered a deep cut on his forehead. The attacker argued with another cop before lunging at him and pushing him to the ground. Passersby recorded the beating on their cellphones.

#WATCH: A man who was allegedly drunk assaulted two traffic policemen in Karnataka's Davangere earlier today. Police arrested the man and a case has been registered against him. pic.twitter.com/kahGksU0A7

The lawyer has been arrested.

The Suprintendent of Police Davengere Chetan Singh Rathore said a case has been registered against the accused for assaulting officers on duty. The police are waiting for his medical report before pressing charges for drink driving.