Having highlighted a Rs 11,000 crore shortfall in GST compensation from the centre, the Chief Minister moved on to a new agriculture policy and plans for Bengaluru 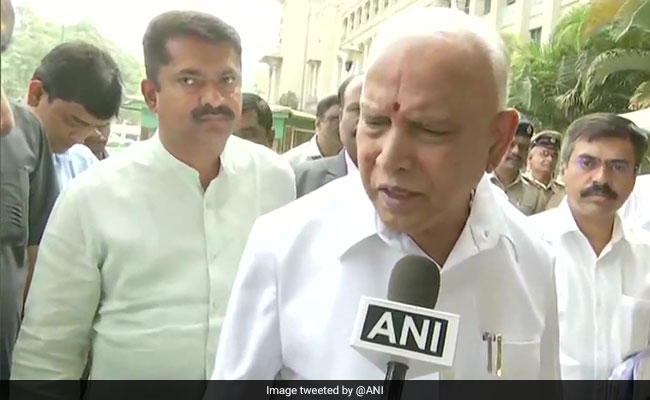 Karnataka Chief Minister BS Yediyurappa presented the state budget, the seventh occasion he has done so, in the Assembly today. Mr Yediyurappa, who was sworn in as Chief Minister in July last year, after the dramatic fall of the 14-month-old Congress-Janata Dal Secular coalition government, began by praising some of Prime Minister Narendra Modi's policies.

Following this the veteran BJP leader highlighted shortfall in funds the state had expected from the centre, with specific focus on the state's share in central taxes under the 15th Finance Commission; this had reduced funding by more than Rs 8,000 crores.

A further Rs 11,000 crores is pending from GST (goods and services tax) collection by the centre; states had been promised compensation for a period of five years after GST was implemented in 2017 due to a loss of revenue. The shortfall comes despite the centre collecting over Rs 1 lakh crores in December, the fifth time it had crossed that mark in 2019.

Having raised these financial challenges at the start of his speech, the Chief Minister then revealed his plans for the farm sector, which was hit by both floods and drought last year.

In December last year the state government sent the centre an estimate of Rs 35,161 crores for damages from floods alone. The BJP government in the state was criticised by the opposition after PM Modi and the BJP-led centre were seen to be slow in responding.

Former Chief Minister Siddaramaiah raised this point, saying "none of the 25 MPs (the state sends 25 leaders to the Lok Sabha) had the courage" to discuss this subject in parliament.

.@BSYBJP admits in his budget speech that there is a Financial crisis

He admits 8883cr Aid to state has been cut
Around 11,000 cr state share from centre has been cut
No additional allocation for Flood Relief

In today's speech the Chief Minister announced a new agricultural policy, under which horticulture will be an industry with funding of upto Rs 10,000 for farmers.

A further amount of Rs 200 crores has been set aside to encourage organic farming.

Funding was also announced for the long-pending Mahadayi and Yettinahole projects, both of which are supposed to boost water supply to the state.

The Chief Minister also revealed plans to improve the capital city of Bengaluru, which has struggled to meet growing infrastructure challenges. This included Rs 500 crores for traffic-congested roads and a further Rs 500 crores for the suburban rail project.

Work will also start on a ring road connecting the city to the Bengaluru airport; the road will be 56 kilometres long and cost an estimated Rs 14,500 crores.

Overall the Congress was left unimpressed by several facets of the budget, saying "no clear cut provisions (had been made) for industrial growth or to generate jobs". Mr Siddaramaiah lashed out, saying the budget was neither pro-farmer nor pro-poor people.

No clarity on department wise allocation

None of state potentials have been realized to generate revenue

"This budget is not a pro farmer budget. It is not pro poor people. It is not pro SC/ backward minority. It is not Development budget also. There is no vision for this budget and they have not identified their priorities. It is a directionless, visionless budget," he said.

Karnataka Home Minister Basavaraj Bommai hit back in defence of the budget, calling it a "brave and realistic effort" from the Chief Minister.

"In spite of a very bad economic legacy from the Congress and JDS, and the downward trend of the economy, he (Mr Yediyurappa) has given (a) pro-farmer and pro-development budget... impetus to power, irrigation, tourism," he declared.