Karnataka BJP spokesperson S Prakash said, "The party distances itself from such statements. He (Renukacharya) has made these statements in his personal capacity and the BJP has nothing to do with anything he said." 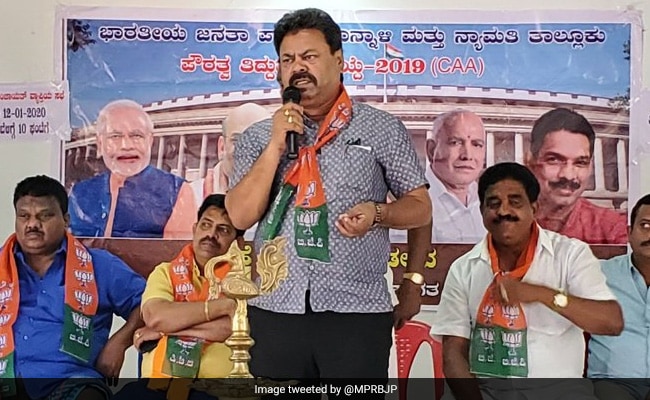 "Instead of offering prayers (namaz), Muslims are storing weapons in mosques and their priests (khazis) are giving fatwas instead of sermons," Mr Renukacharya claimed at a pro-CAA rally in his home town Honnalli in Davenagere district, around 300 km from Bengaluru.

A former minister in the previous BJP government (2008-13), Mr Renukacharya is currently the political secretary to Karnataka Chief Minister BS Yediyurappa since August 2019.

He also said that since the Muslims had not responded to his call to support the Citizenship Amendment Act (CAA) as evident from their absence at the rally, he would divert funds earmarked to their welfare to Hindus in his Assembly constituency.

"If they (minorities) consider our party (BJP) to be enemy despite treating them as equals, I too will ignore them and not entertain them if they continue to oppose our policies and programmes," he said in Kannada.

The Bharatiya Janata Party or BJP has distanced itself from Mr Renukacharya's statement.

Karnataka BJP spokesperson S Prakash said, "The party distances itself from such statements. He (Renukacharya) has made these statements in his personal capacity and the BJP has nothing to do with anything he said."

However, another party spokesperson G. Madhusudhana was quoted by news agency IANS as saying, "We will review what he (Renukacharya) said, the context in which he said it, and act against offenders if weapons are found in mosques."

Expressing disappointment over the non-participation of the minorities in the rally, the MLA said he was disheartened by the radical change in them (Muslims) against him and his party, even though he never differentiated or discriminated against anyone.

"As an MLA for all, I have been hosting Muslims, embracing them and offering them tea and snacks when we meet. If they don't want me, then I too will keep away and won't ask for their votes," Mr Renukacharya said in the regional language.

The opposition parties have demanded a probe and action against Mr Renukacharya for his remarks.