After the video of the incident was viral, the Congress state unit slammed the government for its "apathy" to provide an ambulance to transport the body. 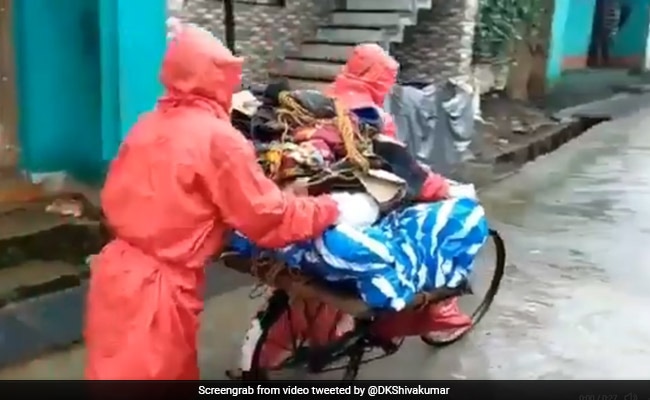 The video was shared by Congress leader DK Shivakumar

With no one reportedly coming forward to help due to the COVID-19 scare, a family was forced to transport a body on a bicycle amid heavy rains at a village in Karnataka's Belagavi district on Sunday.

After the video of the incident was viral, state Congress chief DK Shivakumar wrote on Twitter: "Relatives of a 70-year-old person who died in Kittur, Belagavi had to carry the body for cremation on a bicycle in heavy rains. CM BS Yediyurappa, where is your government? Why was an ambulance not provided? This incompetent Govt lacks humanity and has been a total failure in handling the pandemic."

Relatives of a 70-yr-old dead person in Kittur, Belagavi had to carry the body for cremation on a bicycle in heavy rains.

CM @BSYBJP, where is your govt? Why was an ambulance not provided?

This incompetent Govt lacks humanity & has been a total failure in handling the pandemic. pic.twitter.com/PQfUe2oFXg

According to the family members, the man had fever for two days and the medical team at the local primary health care advised the family to admit him to hospital as he was showing coronavirus symptoms.

As the family prepared to take him to hospital, he died.

The family said they had dialled the emergency number for an ambulance but got no response.

The neighbours too did not come to their aid due to COVID-19 scare, they claimed.

Finally, the family decided to carry the body on a bicycle amid rains and took it to the cremation ground for the funeral.

Government and hospital officials were not immediately available for comment.