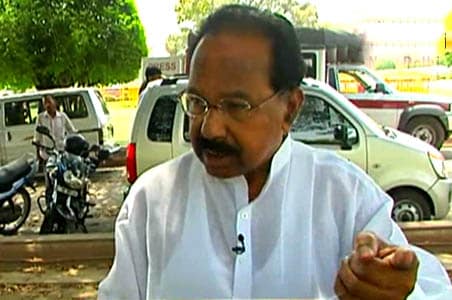 Congress is going to come back to power, Veerappa Moily said. (File)

New Delhi: Senior Congress leader M Veerappa Moily has dismissed talk of infighting within the party over the selection of candidates in Karnataka saying the state leadership is "totally united" in the battle against the BJP in the upcoming Assembly polls.

Mr Moily, a former Union minister and an MP from the state, also hailed Chief Minister Siddaramaiah and said he had brought political, social and economic stability to the state.

In an interview to PTI in New Delhi, the former Karnataka chief minister brushed aside protests across parts of Karnataka by supporters of ticket seekers who had failed to make it to the list.

"They (ticket-seekers) have strong aspirations that is why for the time being they will do it (protest), but ultimately they will realise...," Mr Moily, 78, said.

The demonstrations indicated that the Congress was going to retain power in the state, Moily asserted.

This (the protest) is more because people know very well that Congress is going to come back to power," he said.

Asked if infighting could hamper Congress's chances in the Assembly polls, he said Siddaramaiah was the only Karnataka chief minister in recent times to have provided a stable government for five years.

The two-time MP from Chikballapur also asserted that the party's state leadership was "totally united".

Media reports had earlier suggested party veterans from the state such as Mr Moily, Mallikarjun Kharge and KPCC chief G Parameshwara were in favour of giving tickets to long-time party workers instead of those who had switched sides.

However, the chief minister seems to have had his way in the selection of candidates, with many party hoppers being given tickets.

The ruling Congress in Karnataka has announced a list of 218 candidates and is in the process of finalising the names for the remaining six constituencies.

In an angry backlash after the Congress announced its candidates, sections of workers staged protests at several places.

"In every constituency there are three or four very good aspirants, excellent workers, excellent leaders. This is a good trend for the Congress party. We don't consider it to be a liability, he said.

Mr Moily had stated last month that his son Harsha Moily would not contest the Assembly elections for the "sake of the unity" of the ruling party.

His announcement had come after he was embroiled in a controversy when he tweeted about "money in politics" in the selection of candidates for the Assembly polls in Karnataka, landing the party in a spot. He later deleted the tweet.

Mr Moily, who heads a 15-member panel formed to draft the party's manifesto for the Karnataka polls, said he has presented the draft to the chief minister, the KPCC president and also K C Venugopal, general secretary in-charge of Karnataka.

He said after the draft goes through the process of final approvals, it would be released soon.

The senior leader also stressed the Congress would get a comfortable majority in the polls and its victory would signal the fall of the Narendra Modi government in 2019.

Mr Moily said there was no anti-incumbency factor in Karnataka as the Siddaramaiah government had fulfilled all its promises, but the sentiment would run against Modi at the Centre.

"Finance has been collapsing because of the half-baked GST law, demonetisation and also the handling of banks. All these factors will go against them not only in the 2019 election, but wherever elections are going to be held in the states," said Moily, who is also the chairman of the Parliamentary Standing Committee on Finance.

He, however, added that there was no substitute for the Congress party as the leader of a grand alliance.

Praising Rahul Gandhi, Moily said the Congress president had now "definitely proved that he is more than a match for Narendra Modi".

"This is a fact which I think the rest of the political parties will also realise," he said.