The audio tape war is set to play out in the assembly on Monday, with BS Yeddyurappa saying that his party would raise the matter about an audio tape involving HD Kumaraswamy 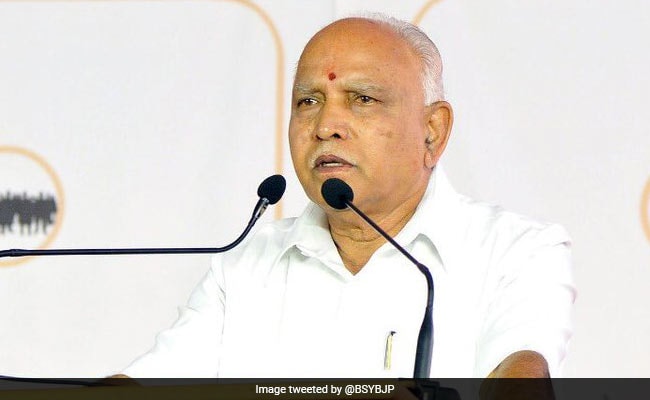 Accusing Chief Minister HD Kumaraswamy of indulging in ''third grade'' politics, Karnataka BJP chief BS Yeddyurappa on Sunday said he was ready for any inquiry into an audio clip about his alleged bid to destabilise the coalition government in the state.

The audio tape war is set to play out in the assembly on Monday, with Mr Yeddyurappa saying that his party would raise the matter about an audio tape in which Mr Kumaraswamy is heard purportedly discussing cash-for-seat with supporters of an MLC seat aspirant, which had stirred a controversy in 2014.

"The Chief Minister is doing third grade politics. He is indulging in blackmail, conspiracy. The Chief Minister had himself sent the MLA's son (Sharan Gouda) to the guest house where I was staying at around 12:30 in the night and made him speak to me. They have kept the part of discussion (in the tape) that they needed as record, leaving the rest," Mr Yeddyurappa said.

Pointing out that the Chief Minister had himself claimed that he had sent the MLA's son to him, Mr Yeddyurappa said, "It is true that he (Sharan Gouda) had come and spoken to me."

"What happened...all those things let's see in the future, but the Chief Minister has stooped to the level of sending someone and getting the conversation recorded. No Chief Minister in independent India has behaved in such a manner," he told reporters in Hubballi, adding that he was ready for any inquiry.

Facing turmoil in the Congress-JD(S) ruling coalition that has cast a shadow over the stability of his government, Mr Kumaraswamy had on Friday released the audio clip in which Mr Yeddyurappa is purportedly trying to lure JDS MLA Naganagouda through his son.

Mr Yeddyurappa, who is at the vortex of the row over his alleged bid to poach the ruling coalition MLAs for the past few weeks, was quick dismiss the clip as "fake" and a "concocted story".

He had on Friday dismissed the claim by the Chief Minister that he had spoken in the audio about a ''Rs 50 crore'' offer to the assembly speaker.

"I will retire from politics if it (the allegation) is proved If I had spoken like this(about the speaker), if it is proved,I will resign as an MLA and quit politics," he had said.

Referring to the audio involving Mr Kumaraswamy that had stirred a controversy in 2014, Mr Yeddyurappa on Sunday said that demanding Rs 25 crore to make someone an MLC was an unforgivable offence.

"We have the documents, tomorrow we will hand it over to the Speaker... We have to bring out the true colours of the Chief
Minister who had stooped to the level of demanding Rs 25 crore
to give it to MLAs (in return for votes). It should also be
inquired into," he said.

Mr Kumaraswamy was at the centre of a controversy in July 2014 after an audio CD surfaced of him purportedly telling supporters of MLC seat aspirant Vijugowda Patil, the then JDS leader from Bijapur district, about the demand for money from his party MLAs in return for votes.

In the tape, Mr Kumaraswamy was purportedly heard telling the supporters, "Each MLA (of JDS) is asking for one crore. They are saying you make anybody the MLC." At another point, Kumaraswamy was heard saying, "40 people (JDS MLAs) are asking for 40 crore...This is my fate."

Meanwhile, reacting to Mr Yeddyurappa's comments, Mr Kumaraswamy said he was ready for any discussion on the audio tape involving him.

"Yeddyurappa, who had called it (tape) mimicry theother day has now conceded (about speaking to MLAs son) today. Mostly Lord Manjunatha Swamy of Dharmastala has given him sense," he said.

Speaking to reporters in Bengaluru, he said "he (Yeddyurappa) has said that he will come with some old thing (audio tape) tomorrow (to assembly)... let him come, I''m ready. Did I ask for money? I don''t have money... It was discussed within the party and not to lure other party people with Rs 10 or 20 crore as Chief Minister."

Mr Kumaraswamy said the Speaker would take a call on the further course of action regarding the tapes.

Taking serious note of his name being dragged in the purported conversation involving Mr Yeddyurappa in an alleged bid to lure a JDS MLA, Speaker KR Ramesh Kumar had said he would take up the issue in the House on Monday and had gone through the letter and tape sent to him by the Chief Minister.

Hitting out at Mr Yeddyurappa, Congress leader and former Chief Minister Siddaramaiah said his statement made it clear what he was up to.

"Yeddyurappa is mad after power and wants to topple a constitutionally formed government at any cost to become Chief Minister," he said.

Deputy Chief Minister G Parameshwara said now that Mr Yeddyurappa has accepted that he spoke to the MLAs son, he has to announce his retirement as he had claimed that he would quit politics.