Around 1,024 villages in 17 districts of the state have been affected due to floods caused by incessant rains in the region. 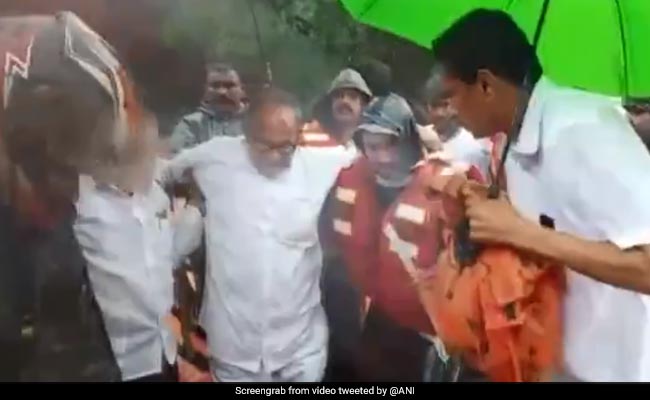 A rescue team on Saturday safely evacuated former Union Minister and Congress leader B Janardhana Poojary from his flood-hit house in Dakshina Kannada district in Karnataka.

Around 1,024 villages in 17 districts of the state have been affected due to floods caused by incessant rains in the region.

Mr Yediyurappa informed that over two lakh people have been evacuated from flood-affected areas and 1.61 lakh people are in 664 relief camps across the state.

The floodwater is likely to recede in two to three days, Mr Yediyurappa said.

Mr Yediyurappa has announced Rs 5 lakh compensation to the family members of those who lost their lives in the floods.

"So far, 24 people have lost their lives due to floods. Compensation of Rs 5 lakh will be given to the next of kin of the deceased," Mr Yediyurappa said.

Mr Yediyurappa also said that around 3.75 lakh hectare crop area, 14,000 houses and 478 km of power lines have been damaged in the floods.

The authorities have closed all government and private schools and colleges in flood-affected districts till August 15.

All Konkan Railway trains were also cancelled after a landslide occurred near the Karwar area in Uttara Kannada district.