Made necessary by the resignation of Congress-JDS MLAs, the bypolls could see the two parties form a second coalition in as many years, if only to keep the BJP out of power again 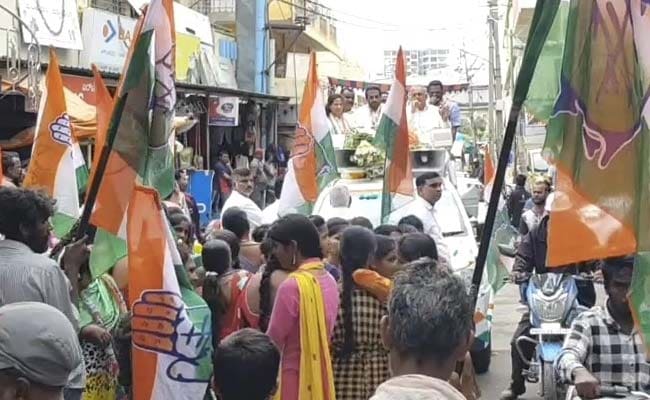 Bypolls to 15 Assembly seats in Karnataka will be held on Thursday - exactly a week after Uddhav Thackeray was sworn-in as Maharashtra Chief Minister to end weeks of chaos and frustrate the BJP's attempt to retain power in the state. The interesting question now is if events in Maharashtra could impact the Karnataka bypolls, which were made necessary after sitting MLAs resigned in July and triggered the collapse of a Congress-JDS coalition (after which the BJP formed the government). Sixteen MLAs, who were disqualified for their actions, joined the BJP last month.

"Bypolls are important because democracy is in danger. The BJP is set to demolish Constitution, demolish democracy... bring in dictatorship. Purchasing MLAs left, right and centre. What happened in Maharashtra was such a disgrace," Rizwan Arshad, the Congress's Shivajinagar candidate, told NDTV.

In October's election the BJP (105 seats) and the Shiv Sena (56) contested together and emerged with a clear majority in the 288-seat Assembly. However, the Sena refused to play second fiddle and began talks with the Congress (44) and the NCP (54) to form a new front.

The BJP, accused by the Sena of horse-trading MLAs, attempted a power grab. The final days involved the Sena-Congress-NCP playing hide-and-seek with their MLAs to prevent them from being poached.

"They tried to come to power despite people not giving full majority... same thing they have done in Karnataka. They bought over our MLAs spending hundreds and thousands of crores of black money," Rizwan Arshad said.

He also called the BJP "the most corrupt party" and said it had been exposed in its games.

The scenes were similar to what happened in Karnataka a few months earlier, including the dramatic stand-off at a Mumbai hotel - something the Congress's state unit said in a tweet, as the two parties sparred on Twitter today on the last day of campaigning.

The JDS has said Maharashtra shows that regional parties are the answer in state politics.

"The Maharashtra election shows the Congress, which wanted to keep a distance from communal forces (a reference to the Sena) - is joining hands with them? The Congress has no morality... it has to be restored from regional parties," Tanveer Ahmed, the JDS's Shivajinagar candidate, told NDTV.

Following the collapse of their coalition the Congress and the JDS are fighting these bypolls independently. However, a post-poll Congress-JDS coalition, if only to keep the BJP out of power again (which is what happened in 2018) has not been ruled out.

The BJP has pounced on this possibility, with its state unit tweeting: "Little do these shameless parties realize that Kannadigas have already decided to VoteBJPToSaveKarnataka from their 'Dirty Politics'".

Two days before the assembly by-elections @INCKarnataka and @JanataDal_S are day dreaming of forming another coalition government.

Little do these shameless parties realize that Kannadigas have already decided to #VoteBJPToSaveKarnataka from their "Dirty Politics".

For its part the BJP, which will field 13 disqualified MLAs in these bypolls, is confident Maharashtra will not play on the minds of the voters.

"Maharashtra will not have any impact on Karnataka (where) our government is stable. It will become more strong and stable," Ashwath Narayan, the Deputy Chief Minister, said.

The BJP needs to win at least 7 of the 15 seats up for grabs on Thursday to have a majority in the Assembly. Should they not win the minimum, Karnataka will be the next state, after Maharashtra, to give the ruling part a headache.