In 'Game Of MLAs', NCP Moves Its Flock To Another 5-Star Hotel In Mumbai

Pandemonium broke out in Maharashtra in the early hours of Saturday morning after the BJP returned to power, with Devendra Fadnavis sworn in as Chief Minister and Ajit Pawar becoming his deputy 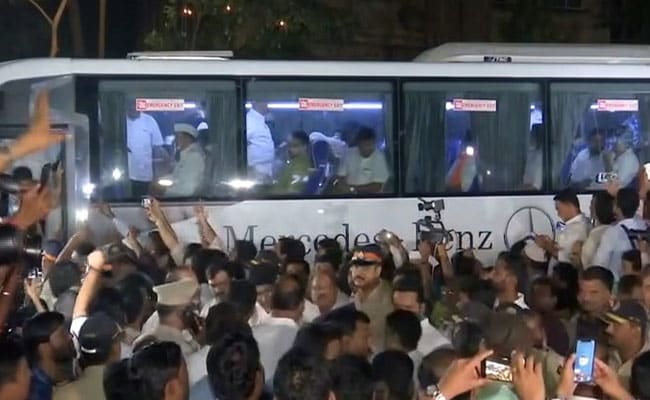 NCP, Congress and Sena MLAs have been sequestered in hotels around Mumbai

The NCP has moved its flock of MLAs - said to be around 50 - from one Mumbai hotel to another on Sunday evening in an attempt to throw poachers off the scent. In scenes that wouldn't look out of place in a spy-thriller, the Sena, the Congress and the Nationalist Congress Party (NCP) have all scrambled to guard their respective MLAs against offers to cross the aisle and support the BJP in a floor test that could be called by the end of the month. The BJP, which emerged from last month's election with 105 seats in the 288-seat Assembly, needs around 40 more to reach the majority mark and retain power in the state.

The NCP MLAs, who were holed up in the Renaissance Hotel, were shifted to the Grand Hyatt hotel in Santacruz East. Sources said they were moved because there was too much disturbance at their current location; the Lalit and JW Marriott, where the Sena and the Congress have stashed their MLAs, respectively, are both nearby.

Shortly before news of the transfer was revealed, NCP leader Ajit Pawar, who on Saturday led a breakaway faction of 10-11 MLAs to support the BJP in government formation, was involved in a Twitter exchange with Sharad Pawar, the NCP chief and his uncle.

On Saturday Ajit Pawar had claimed that all 54 of the NCP's MLAs would support the BJP. However, as the day wore on his uncle manged to round up his flock (with help from vigilant Sena workers at Mumbai airport) and that number dropped to five.

On Sunday, while the NCP MLAs were being spoken to by Sharad Pawar and Sena chief Uddhav Thackeray, Ajit Pawar went on a tweet overdrive, ending with a few that suggested his uncle backed the NCP supporting the BJP. A swift denial from Sharad Pawar followed, in which he called his nephew's statement "false and misleading in order to create confusion".

Meanwhile, at the NCP meeting some MLAs claimed that Ajit Pawar had offered them minister's posts to support the BJP.

The Sena-Congress-NCP alliance approached the Supreme Court today demanding an immediate floor test. The court declined to oblige and, instead, asked the Centre to produce two key letters by 10.30 am on Monday.

Pandemonium broke out in Maharashtra in the early hours of Saturday morning after the BJP returned to power. Devendra Fadnavis was sworn in as Chief Minister and Ajit Pawar became his deputy. The move came only hours after a tripartite meeting between the Shiv Sena, the Congress and the NCP, which was attended by Ajit Pawar, appeared to all but settle the question of government formation.

BJP MLAs also held a meeting on Sunday that was attended by Chief Minister Fadnavis. Party leader Ashish Shelar, briefing media after the meet, said they had discussed strategies to win the floor test.