Maharashtra Government: Uddhav Thackeray, in saffron silk kurta, took the blessings of the 'Shivrajyabhishek' or a statue depicting the crowning of Chhatrapati Shivaji before taking oath in Marathi.

Uddhav Thackeray was sworn in as Maharashtra's new Chief Minister on Thursday evening at the Shivaji Park in Mumbai, where his father Bal Thackeray had addressed his first Dussehra rally to announce the birth of the Shiv Sena in 1966. Six more ministers were sworn in by Governor Bhagat Singh Koshyari as the Shiv Sena-Nationalist Congress Party (NCP)-Congress alliance, or Maha Vikas Aghadi, formally took power.

Soon after taking oath, Mr Thackeray held the new cabinet's first meeting. "I want to assure the people of the state that we will give a good government. I want to help the farmers in a manner which will make them happy," he said after the cabinet meet.

Uddhav Thackeray, 59, in saffron silk kurta, had bowed before the "Shivrajyabhishek", a statue depicting the crowning of warrior king Chhatrapati Shivaji, before taking oath in Marathi. An array of political leaders and his family - wife Rashmi Thackeray and son Aaditya - were on a grand stage designed like a fort by Nitin Desai, an art director from Bollywood. Name plate of Uddhav Balasaheb Thackeray as Chief Minister, outside his cabin at Maharashtra Secretariat.

Sources say each party has asked for important ministries like home, urban development, revenue and housing, signaling tough negotiations ahead on portfolios.

Former Chief Minister Devendra Fadnavis of the BJP, who quit three days ago after a huge controversy over the manner in which he took power, also attended the oath.

So did the man who betrayed his party to help him - NCP leader Ajit Pawar. Ajit Pawar is tipped to be Deputy Chief Minister, this time to Uddhav Thackeray. This was his second oath ceremony in six days; on Saturday morning, he had stunned his party when TV screens flashed visuals of him taking oath along with Devendra Fadnavis. Three days after this shock turnabout, Ajit Pawar resigned - having failed to draw NCP MLAs to the BJP's side - and returned to his party and family. 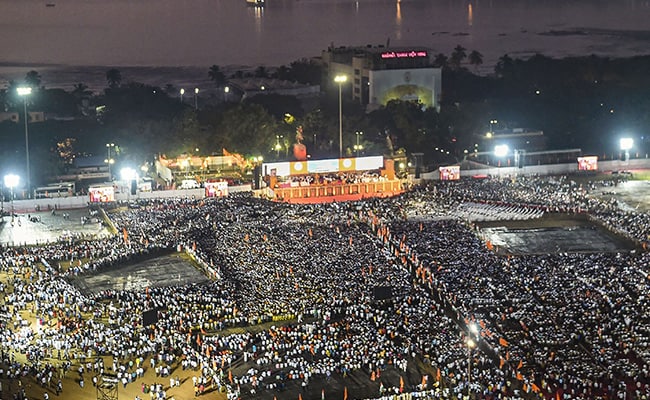 At Uddhav Thackeray's swearing in ceremony, a huge crowd was seen at Mumbai's Shivaji Park.

None of the Congress big three attended the function either, but they wrote to the Sena Chief. Aaditya Thackeray flew to Delhi to invite Sonia Gandhi, former prime minister Manmohan Singh and Rahul Gandhi.

In last month's Maharashtra election, the BJP and Shiv Sena contested the polls together and won a majority. But the Shiv Sena refused to play second fiddle and demanded rotational chief ministership.

Uddhav Thackeray then ended his alliance with the BJP, the Sena's partner for more than 30 years, and entered into talks with the Congress and NCP, two ideologically different parties.

When they were on the verge of sealing an alliance, the BJP surprised them with an unscheduled dawn oath-taking of Devendra Fadnavis last Saturday, for which the central government was active through the night. Ajit Pawar, who took oath as Deputy Chief Minister, declared that all NCP MLAs were with him. Over the next few days, the NCP rallied its flock and managed to isolate "Ajit-Dada".

Mr Fadnavis quit on Tuesday, hours after he was asked to prove his majority in a floor test "within 24 hours".