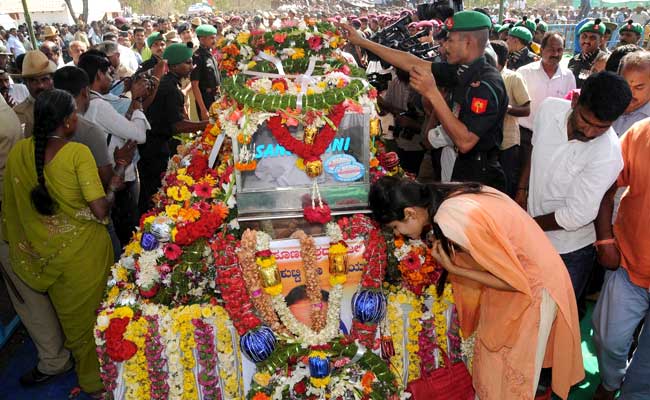 Bengaluru: Hundreds of people paid homage to two more Siachen glacier avalanche martyrs from Karnataka as they were laid to rest with state honours in Mysuru and Hassan districts today.

Sepoy PN Mahesha of HD Kote in Mysuru district and Subedar TT Nagesha of Tejuru in Hassan district were given a 21-gun salute to the sound of bugles before their bodies were buried at their native places.

Chief Minister Siddaramaiah, who hails from Mysuru district, laid a wreath on the flower-decked casket of Mahesha and consoled his bereaved family.

"The chief minister has assured Mahesha's family of compensation, free farm land and a government job to one of its members soon," an official told IANS.

Home Minister G Parameshwara was present at Subedar Nagesha's last rites amid heart-rending scenes as his family was inconsolable.

HD Kote and Tejuru are both about 200 km from Bengaluru.

Lance Naik Hanumanthappa Koppad of Dharwad district was the third soldier from the state who died in the avalanche that struck February 3 trapping the 10 men of the 19th Madras Regiment. Found miraculously alive after six days under heavy snow, he was flown out to New Delhi and admitted in an army hospital but died of multi-organ failure on February 12.