UN Awards Medals To Indian Peacekeepers For Courage In Liberia 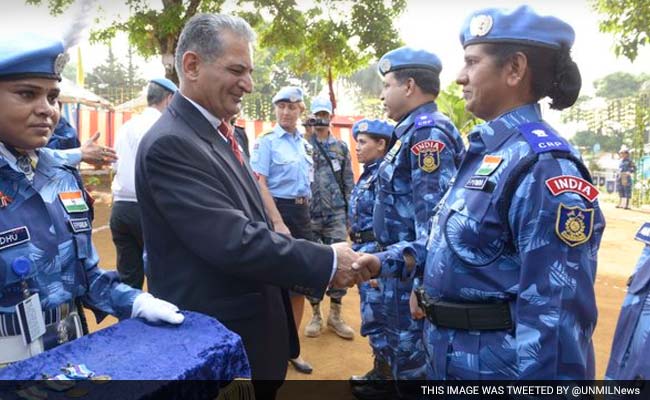 125-strong Indian Formed Police Unit along with 12 Indian personnel of the UN Police serving in the UN Mission in Liberia (UNMIL) were awarded medals.

United Nations: Indian peacekeepers in Liberia, including a women contingent, were honoured with medals for their courage and service in maintenance of peace and security in the West African country.

The 125-strong Indian Formed Police Unit along with 12 Indian personnel of the UN Police serving in the UN Mission in Liberia (UNMIL) were awarded medals during a parade ceremony held recently in Congo Town in Montserrado County.

Addressing the Indian peacekeepers, Special Representative of the Secretary-General for Liberia Farid Zarif expressed his gratitude to the soldiers for their "courage and dedication" in serving Liberia during its time of distress.

He said the peacekeepers offered their services in a nation that "is in distress and in need of support and help from the international community. That is the highest manifestation of your humanism."

Mr Zarif lauded the services of the Indian contingent, particularly at a time when Liberia faced unrest and threat of disease and when many Liberians were leaving the country.

"You decided to come and face the challenges at that crucial point of time. You must be proud of your courage and dedication," he said further.

Mr Zarif bid farewell to the Indian Formed Police Unit, which will be departing Liberia next month.

Meanwhile, the Indian Battalion (INDBATT) operating in the United Nations Mission in South Sudan (UNMISS) base of Melut organised a veterinary camp for the local population.

Recognising the efforts of INDBATT, the County Commissioner of Melut applauded the contribution of Indian troops and said they have had an affirmative effect on the security situation and development process in the area, according to UNMISS.