Indians in China, Australia, Singapore and many other countries marked the day with hoisting of the national flag and singing of patriotic songs. 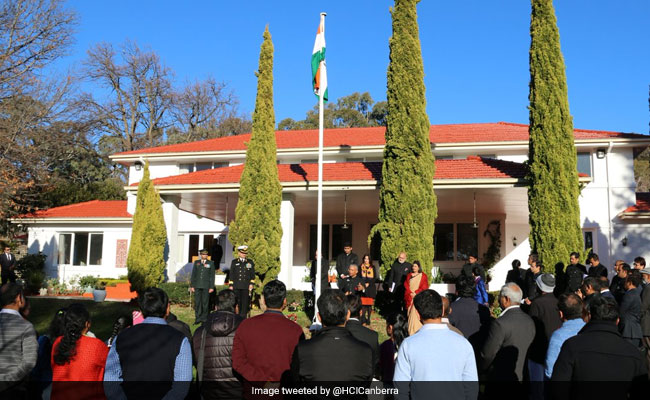 Indians in China, Australia, Singapore and many other countries marked the day with hoisting of the national flag and singing of patriotic songs.

In Beijing, a large number of the Indians took part in the Independence Day celebrations held at the Indian Embassy.

A large number of Indians were present at the occasion.

In Melbourne, a large number of Indian expatriates attended the flag hoisting ceremonies held at the Indian High Commission in Canberra and consulate buildings in Melbourne, Sydney and Brisbane to mark the 72nd Independence Day.

Congratulating the Indian government, Australian Prime Minister Malcolm Turnbull said that India and Australia were great friends with a lot in common as modern, vibrant and diverse democracies.

"Australia's large and growing Indian community makes a much valued contribution to so many areas of our national life - and has for many year," Mr Turnbull said here in an official statement.

"Whether through culture, community, education, science or enterprise, Indian-Australians are helping make our nation stronger and more dynamic.

"We have a connection and friendship that stretch from Adelaide to Amritsar, Hobart to Hyderabad and everywhere in between," he said.

Mr Turnbull said that he was fortunate to have seen the flourishing relationship first hand during his visit to India last year.

"I am confident that our deepening ties will ensure that these friendly relations will continue to prosper in the coming year," he said.

"As Australia's fifth largest export market, and our 10th largest trading partner overall, Australia and India have a relationship based on strong political, economic and community ties," he said.

Mr Tudge highlighted that investment between the two sides have grown significantly in the last decade and the number of Indians born in Australia also jumped.

The Indian flag was unfurled in the presence of more than 800 Indian nationals.

A concert of patriotic songs and cultural performance was also organised to mark the occasion.

A mid-morning reception was hosted at the High Commission for the business community linked to India.