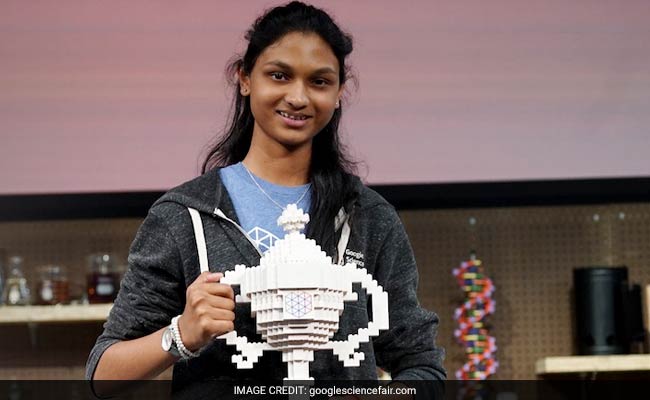 Johannesburg:  A 16-year-old Indian-origin South African teen has won a USD 50,000 scholarship at the annual Google Science Fair in the US for using orange peel to develop a cheaper "super-absorbent material" that helps soil retain water.

Her solution to the problem of drought uses the peels from orange and avocado fruits, which were normally discarded. The Google Science Fair is a programme for any budding scientists between the ages of 13 to 18, who are invited to solve world's biggest challenges using science and technology.

"I have always had a great love for chemistry since I was young. I vividly remember at the age of seven experimenting with vinegar and baking soda solutions in plastic cups," Nirghin said in her submission, in which she cited a renowned Indian scientist as her greatest inspiration.

"M S Swaminathan, has always been an inspiration of mine as he truly believed in the necessary movement of not only India but the whole world towards sustainable agricultural development," she said.

"I hope to one day become a scientist specialising in agricultural science and also become a molecular gastronomist," she added.

Nirghin explained how she had found an alternative in the fruit peels to super-absorbent polymers (SAPs), which absorb and carry about 300 times its weight in liquid relative to their own mass.

"These SAPs are not biodegradable, costly and full of acrylic acid, sodium hydroxide and other chemicals. During more research in the topic, I found that natural occurring polymers exist in most citrus fruits," Nirghin said.

After 45 days of experimentation, Nirghin was successful in creating a low-cost super-absorbent polymer, made out of waste products found in the juice manufacturing industry, that is biodegradable, can retain large amounts of water, keep soil moist and improve crop growth without regular water supplements.

"The only resources involved in the creation of the 'orange peel mixture' were electricity and time, with no special equipment or materials required," she said.

Nirghin's discovery has huge financial implications for agriculture, as her creation could retail at USD 30 to USD 60 per metric tonne, as compared to the USD 2,000 plus costs of SAPs.

The young scientist is convinced that her mixture will help assist farmers in agricultural drought disaster areas, where food security could increase by 73 per cent.

Promoted
Listen to the latest songs, only on JioSaavn.com
Now Nirghin has set her sights on using orange peel SAP in experiments testing water filtration and oil removal from water.

"I would also like to make large amounts of orange peel SAP and apply it to crops such as maize and wheat in poorer communities in South Africa," she added.