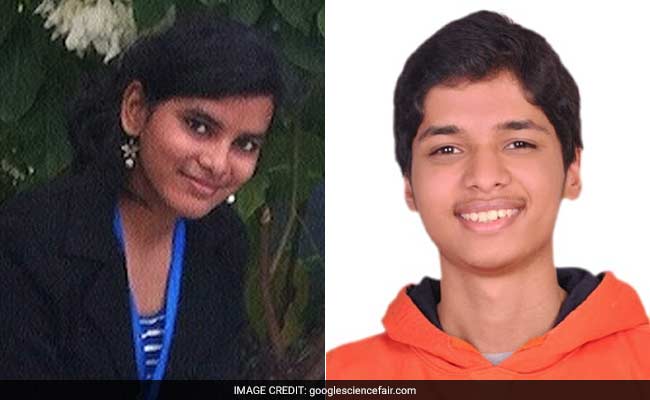 Indian tees, Fatima, from Hyderabad and Shriank from Bangalore, made it to Google Science Fair finals.

Two Indians and four other Indian-origin teenagers are among the 16 global finalists for the sixth annual 'Google Science Fair 2016' who will compete for the USD 50,000 scholarship.

Fatima, 15, from the Sadhu Vaswani International School in Hyderabad has developed a control system to provide automatic water management system which controls the operation of the gates at the main reservoir and the supply at the field irrigation canals.

Shriank, 15, studying in high school at National Public School, Indiranagar in Bangalore, has developed KeepTab which is a wearable-device that uses a cloud-based deep-learning framework to aid human-memory recall the location of their day-to-day objects.

He was also a finalist at the FIRST LEGO League World Championships in 2012.

The Indian-American teens who have made it to the global finalist of the Google Science Fair are Anika Cheerla (14), Anushka Naiknaware (13), Nikihl Gopal (15) and Nishita Belur (13).

Indian-American Gopal, 15, from New Jersey was chosen as a finalist for his project, 'Point of Care Testing for Malaria Using a Smartphone and Microfluidic ELISA.'

Cheerla from California has been selected for her project, 'Automated Prediction of Future Breast Cancer Occurrence from Non-Cancerous Mammograms.'

Naiknaware, of Portland, Oregaon made it to the finals for her project, 'Fractal Inspired Chitosan and Carbon Nanoparticle Based Biocompatible Sensor for Wound Management.' Belur from California was selected as a finalist for her project detection of metal surface defects using laser light reflection.

The Google Science Fair is a global online science and technology competition open to individuals and teams from ages 13 to 18.

As Indian Couple Faces Drug Charges In Qatar, Attempts To Bring Them Back