Some Opposition party MPs reacted to it as a veiled threat to the UK's neighbouring country of Ireland. 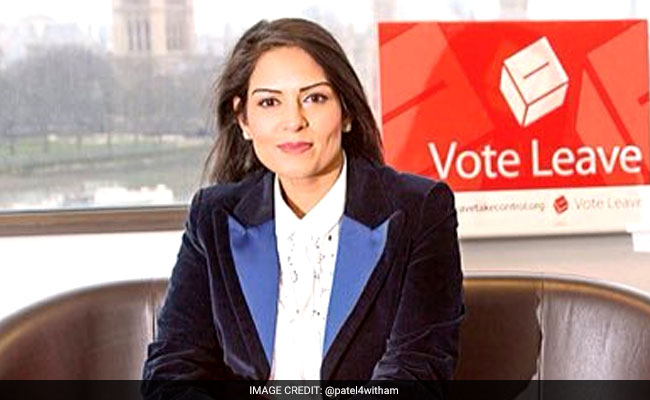 A prominent Indian-origin Brexiteer MP has come under pressure over her suggestion that potential food shortages between borders could be used as leverage to secure a better deal from the EU, ahead of a crucial vote in the UK Parliament next week over Prime Minister Theresa May's Brexit deal.

Priti Patel, one of the most vocal Conservative Party MPs opposed to May's deal, was reacting to a leaked UK government report indicating that there could be food shortages in Ireland in the event of a no-deal Brexit. It said the economic impact on Ireland would be worse than in the UK.

"This paper appears to show the government were well aware Ireland will face significant issues in a no-deal scenario. Why hasn't this point been pressed home during negotiations," she told 'The Times' in reference to the report.

"There is still time to go back to Brussels and get a better deal," she said.

However, some Opposition party MPs reacted to it as a veiled threat to the UK's neighbouring country of Ireland.

"Threatening Ireland in this way is as morally reprehensible as it is futile. Britain should be showing itself to be a dependable neighbour and friend in the future," said Indian-origin Labour Party MP Lisa Nandy.

Ireland's deputy prime minister Simon Coveney added that Ms Patel's comments were "ridiculous" and some others branded it as insensitive given Ireland's history involving the Great Famine between 1845 and 1849.

The row played out against the backdrop of efforts to secure enough support to get Theresa May's Withdrawal Agreement through the House of Commons in the major Brexit vote planned for next Tuesday.

Most Opposition party MPs and many of her own MPs remain opposed to it with the central sticking point revolving around the so-called "backstop" involving open border arrangements between UK territory Northern Ireland and EU-member Ireland.

Tory MPs are warning their leader that she could be forced to stand down as Prime Minister if her Brexit deal is defeated in the Commons next week.

Meanwhile, Opposition Labour leader Jeremy Corbyn said he would consider delaying Britain's exit from the EU to negotiate a better deal if his party came to power.

"If we go into government straight away we would start negotiating straight away. If it meant holding things a bit longer to do it, of course," he said.

Britain's formal Brexit Day is set as March 29 next year, which can be extended if agreed by the other 27 EU member-countries.

With the Commons vote on the Withdrawal Agreement increasingly expected to result in it being rejected by MPs, the risk of a no-deal Brexit chaotic Brexit have led to pressure mounting on May to delay the December 11 vote.

Many of her own MPs want her to go back to Brussels and seek more concessions from the European Union (EU) at a summit at the end of next week.

However, the EU has dismissed the idea of further negotiations on the agreement, setting the stage for potential stalemate and increasing hopes in some quarters of a "People's Vote" or a second referendum to revisit the vote in favour of Brexit in June 2016.

Indian Engineer Who Fell To His Death In Dubai Committed Suicide: Cops