Bhasha Mukherjee, who competed in Miss World 2019 as Miss England last year, was in India as part of a charity mission but decided to return to her job as a junior doctor to join her colleagues at Pilgrim Hospital in Boston, Lincolnshire, to help with the coronavirus workload pressures. 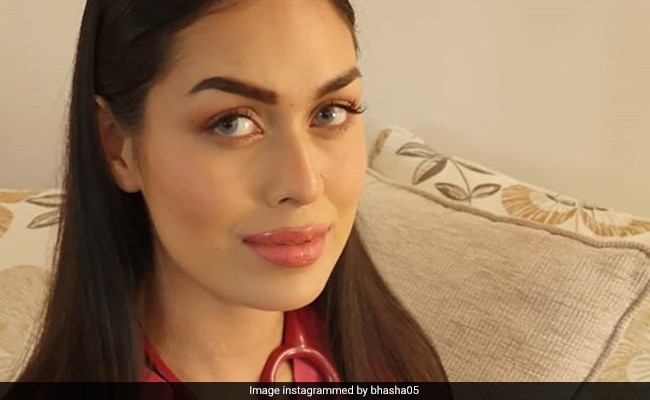 An Indian-born beauty queen, who has put her pageant life on hold to return to the National Health Service frontlines as a doctor at a hospital in eastern England, is petitioning the UK government to address the housing concerns of medics fighting the COVID-19 pandemic.

Bhasha Mukherjee, who competed in Miss World 2019 as Miss England last year, was in India as part of a charity mission but decided to return to her job as a junior doctor to join her colleagues at Pilgrim Hospital in Boston, Lincolnshire, to help with the coronavirus workload pressures.

The 24-year-old, currently in self-isolation for the stipulated 14-day period after flying back from India last week, launched an online petition calling for at least a 50 per cent discount on hospital accommodation.

"I speak not only for myself but also all the medical staff that are being forced to choose such accommodation when they're working 13 hour shifts a day almost seven days a week, hardly using the living spaces and paying prices comparative of cities like London, in a place like Boston, a small rural town in Lincolnshire," said Mukherjee.

"I am not asking for a freebie. All I ask is for hospital accommodation providers like Progress Living and others around the country to match the market! Give us a 50 per cent discount for the 50 per cent of every 24 hours we're slogging at the frontline, risking a 50 per cent chance of contracting COVID-19 and 50 per cent of losing our lives," she said.

Mukherjee, from the town of Derby in the East Midlands region of England, would have to move miles away from her family home to return to her junior doctor post next week.

She said that previously whilst working at the same hospital she was living in a shared house with affordable rent. Now with the constraints of the pandemic, she would be potentially risking non-medical housemates and the community if she opted for similar living conditions.

"Thus, I am left with no choice but to opt for hospital accommodation which is an extortionate 605 pounds minimum for doctors of my pay grade. This is double the market price for a tiny room with an uncomfortable single bed, en suite bathroom and has been reported frequently for pests and bed bugs," she notes.

"Why when there are countries like India, who are putting staff up in the empty hotels for free to incentivise and reward their hard work?" she asks.

Her petition, addressed to British Prime Minister Boris Johnson and Progress Living, has attracted over 300 of the 500 target signatures within days.

Progress Living, a charitable organisation part of the UK's Progress Housing Association, said it has worked closely with the hospital's United Lincolnshire Health Trust (ULHT) to provide much needed hospital accommodation for nearly 15 years and that its rents are set in line with independent market valuations.

Bernie Keenan, Deputy Chief Executive and Executive Director (Services and Growth), Progress Housing Group, said: "Like our colleagues in the NHS, our own staff are working incredibly hard, night and day, seven days of the week, to keep our accommodation available, clean and properly maintained for the increased numbers of medical staff requiring places to stay.

"We will continue to work closely with the Trust and with the NHS to respond to any additional requirements they have during this very difficult period," Keenan said.

In her petition, Mukherjee also highlights the UK-wide shortage of personal protective equipment (PPE) such as masks and aprons for frontline NHS staff, including at her particular hospital.

"Those of us still going to work/returning to work are choosing to do so knowing the risks. Junior doctors like myself are being given additional responsibilities, beyond our training and not even being offered a pay raise to match the new job role and responsibility,"she said.

"Our mandatory training has been compromised, our teaching hours have been almost zeroed and same with opportunities for us to do rotations at different specialties that we had opted for. Junior doctors are having to purely focus their time on shift work," she said.

Mukherjee, who spent her early childhood in Kolkata and moved to the UK with her parents aged 9, speaks five languages and has a Bachelor's degree in Medicine and Surgery from the University of Nottingham.

She believes her Miss England and Miss World participation connects with her medical profession as a platform to spread the message of healthy living, especially within the UK's Indian community.

"I want to take this platform of Miss England and empower people to take control of their own health and stay well in the community," she said at a charity fundraiser last year for Hope Foundation, a UK charity working with street-connected and slum children in Kolkata, which she supports as part of her beauty with a purpose mission.