Devdan Devaraj is the only child of Indian-origin civil servant Dave Deveraj and his Chinese origin interior designer wife Shu Wen Devaraj. The husband and wife are both 33 years old. 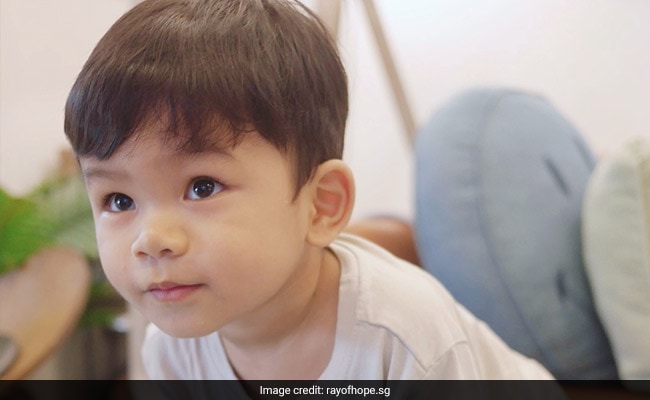 A two-year-old boy of Indian origin in Singapore recovered from a rare neuromuscular disease and regained the ability to walk with the help of Singaporeans who donated nearly 30 lakh Singapore dollars (Rs 16.68 crore) for his expensive treatment.

Devdan Devaraj is the only child of Indian-origin civil servant Dave Deveraj and his Chinese origin interior designer wife Shu Wen Devaraj. The husband and wife are both 33 years old.

"A year ago, my husband and I couldn't even picture him walking. At that point, even standing was an issue. So to see him walk now and even ride a tricycle with some assistance is such a miracle to us," The Straits Times quoted mother Shu Wen Devaraj as saying on Wednesday.

Ray of Hope's general manager, Tan En, said the sum was the largest raised for a single beneficiary on its platform.

The amount was almost two-thirds of the 44 lakh Singapore dollars (Rs 24.3 crore) Ray of Hope collected from 214 fund-raisers on its site last year.

"To my knowledge, I believe it's (the contribution for Devdan) among the largest for a single fund-raiser in Singapore," he said.

When Devdan was 1-month-old, he was diagnosed with spinal muscular atrophy, which leads to muscle weakness that worsens over time. If left untreated, he could face total immobility in his teenage years, among a host of other problems.

In September last year, Devdan was treated with Zolgensma, a one-time gene therapy treatment for children with spinal muscular atrophy, at the National University Hospital.

It is touted as the most expensive drug in the world and costs around SGD2.9 million.

Shu Wen Devaraj said, "We cannot thank the public enough for their donations and we will always be grateful to them. I hope they know that their kindness has changed Devdan's entire life."