Vijaya Kumar Krishnasamy, 32, and Chandrasekar Nallayan, 44, were sentenced on Friday for money laundering and fraud offences around the world following an investigation by Scotland Yard''s Economic Crime Unit. 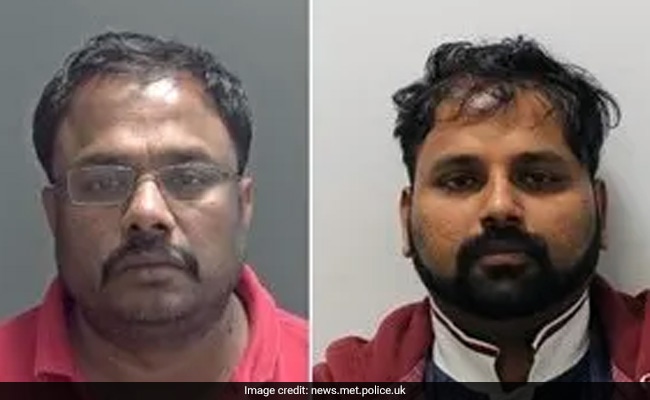 Both were jailed for in money laundering case involving 2.4 million pounds. (Representational)

Two Indian-origin men have been jailed in the UK for a total of 12 years and nine months for their involvement in a global money laundering operation involving 2.4 million pounds and an attempt to launder a further 1.6 million pounds.

Vijaya Kumar Krishnasamy, 32, and Chandrasekar Nallayan, 44, were sentenced on Friday for money laundering and fraud offences around the world following an investigation by Scotland Yard's Economic Crime Unit.

"This shameless pair have caused untold distress and worry to their victims. This case shows that those responsible for money laundering will be tracked down and face up to their crimes," said Detective Constable Milena Bingley, from the Metropolitan Police's Central Specialist Crime - Economic Crime Unit.

This conviction should be a warning to those who believe they can benefit from money laundering and get away with it, she said. "We will work closely with the banking industry to target organised criminal networks."

"This was a complicated case and I would like to thank our partners in the banking sector and the Cyber Defence Alliance for their support and assistance during this investigation," Mr Bingley said.

The case dates back to 2018, when Croydon Crown Court in south London heard that the police received a report from Barclays Bank that several IP addresses were repeatedly accessing multiple business accounts suspected of being utilised for money laundering.

"We continue to be committed to supporting law enforcement in its efforts to combat criminality and protect customers' funds," said a Barclays Bank spokesperson.

"We worked with the Metropolitan Police Service during its investigation and welcome the outcome of the proceedings," the spokesperson said.

Operation Palcalla was launched and officers from the Met's Economic Crime Unit worked with the Cyber Defence Alliance (CDA) to investigate. Officers traced the suspect IP addresses to properties in the Croydon area.

"The CDA were delighted to work with the MPS on Operation Palcalla, a first class excellent example of public private partnerships being used to tackle those organised criminal networks targeting the financial sector, their customers and using money muling networks to cash out their criminal gains," said Steven Wilson, CEO of the CDA.

"The CDA were able to undertake background investigations with their member banks, identify significant criminal activity and provide the MPS with actionable intelligence that led to the arrest and conviction of a prolific criminal and the disruption of his criminal network," he said.

On May 2 last year, a search warrant was executed at one of these addresses and Vijaya Kumar Krishnasamy was arrested.

A search revealed hundreds of pages of documents relating to dozens of suspicious businesses and hundreds of bank accounts.

His mobile phone contained thousands of images of him accessing various suspect accounts online or withdrawing cash from ATMs. From the evidence on Vijaya Kumar Krishnasamy's mobile phone, Chandrasekar Nallayan was identified as another suspect.

The court heard that he was directing Vijaya Kumar Krishnasamy as to where to transfer the criminal funds. Met Police detectives discovered he owned or controlled "mule" accounts that were being used to funnel the money through.

In total, 24 companies that were victim to the scam were identified from around the world. They would receive a fraudulent email claiming to be from their client, who had previously invoiced them, informing them about a change of their bank account details.

The company, believing they were paying their genuine clients, transferred money to the suspect bank account. They wouldn't know that they had been defrauded until their real client started chasing the payment.

By that time, the majority of money in these suspected "mule" business accounts was transferred out of the UK and could not be recovered.

There were 16 victims who made actual payment of funds into these "mule" accounts. The total value of those transfers was in excess of 2.4 million pounds.

Another eight victims realised that the emails were not genuine, and reported the suspicious emails to their bank or the police. The Met said had these attempts been successful, the victims would have lost close to another 1.6 million pounds.

Vijaya Kumar Krishnasamy entered a guilty plea in February this year for conspiring to conceal, disguise, convert, transfer or remove criminal property between February 1, 2018, and May 1, 2019.

He admitted to having access to the relevant "mule" accounts via online banking, monitoring these accounts, and transferring funds as directed. He confessed that he knew that the funds were the proceeds of crime.

Chandrasekar Nallayan pleaded not guilty to conspiring to conceal, disguise, convert, transfer or remove criminal property. He was convicted along with his accomplice this week for all offences after a trial that took place at Croydon Crown Court.