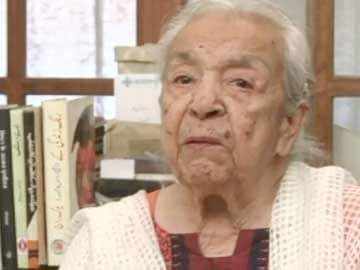 New Delhi: Actress and former dancer Zohra Sehgal died at a hospital in New Delhi today. She was 102.

Ms Sehgal, born on April 27, 1912, started her career as a dancer in choreographer Uday Shankar's troupe. From 1935 to 1943, she was a leading dancer with the troupe and performed across the world including in USA and Japan.

As an actress, Ms Sehgal appeared in movies as varied as Bhaji on the Beach and Hum Dil De Chuke Sanam. She last appeared in 2007's Saawariya.

On Twitter, Ms Sehgal was remembered with respect and affection:

"Prolific & full of life, Zohra Sehgal made a mark through her acting, which is admired across generations. Saddened on her demise," tweeted Prime Minister Narendra Modi.

Promoted
Listen to the latest songs, only on JioSaavn.com
"T 1541 - Zohra Sehgal passes away at 102 yrs ..what a journey and what an immensely loveable co star ! Prayers for her blessed soul !!," tweeted actor Amitabh Bachchan.

"RIP Zohra Sehgal.....what a life....it's that moment when you truly celebrate the end of such a legendary and glorious era...." wrote director and producer Karan Johar on the micro-blogging site.