"Yogi Adityanath My Lord Krishna, I Am His Arjuna": Ravi Kishan

The city of Gorakhpur is expanding massively and problem of congestion and traffic jams often paralyses the city for which flyovers are needed, Ravi Kishan said. 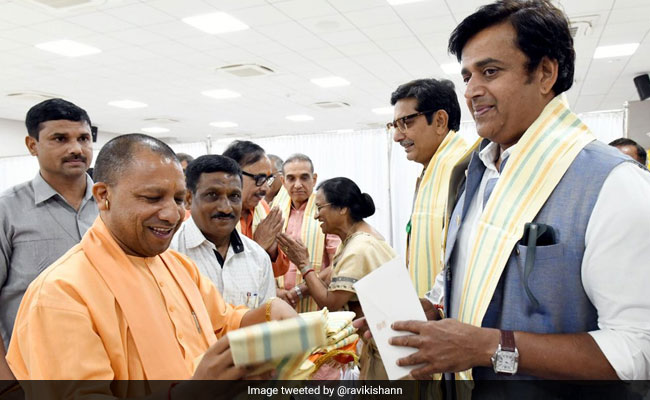 Ravi Kishan is also keen on developing a "film city" in his Gorakhpur constituency.

Bhojpuri actor and newly elected BJP MP Ravi Kishan says he wants to make Gorakhpur one of the "best" cities in north India under the leadership of UP Chief Minister Yogi Adityanath.

Mr Kishan won the Gorakhpur Lok Sabha seat by defeating his Samajwadi Party rival by over three lakh votes. The seat was retained for the BJP by Yofi Adityanath for five consecutive terms before it lost in the 2017 bypolls.

"Yogi Adityanath is my Lord Krishna and I am his Arjuna. Under his leadership I will work to develop Gorakhpur as one of the best cities in north India," he told PTI in an interview.

The city of Gorakhpur is expanding massively and problem of congestion and traffic jams often paralyses the city for which flyovers are needed, said the MP.

"The city needs at least six flyovers in various areas and I have already brought this to the notice of Union minister Nitin Gadkari. I am hopeful, very soon some good news will be there to share with the people," Mr Kishan said.

The 49-year-old actor is also keen on developing a "film city" in his constituency to provide employment opportunities to local youth.

"There are dozens of trades and skills in the film sector besides acting and singing that can provide jobs to youngsters. A film city can fulfil this need by engaging youth not only from UP but also from Bihar and Jharkhand."

A film city in the region may turn into a significant job creator with other allied sectors chipping in, he said.

Mr Kishan, whose earlier electoral foray had resulted in an abysmal show in the 2014 Lok Sabha polls as a Congress candidate from his home town Jaunpur, joined the BJP in 2017.

The work done in UP by PM Modi and Yogi governments, was responsible for the BJP's spectacular show in Lok Sabha polls in the state, he said.

"In coming days, development of the country and Uttar Pradesh will speed up because the party is dedicated to Sabka Saath, Sabka Vikas," Mr Kishan said and added he will be in regular touch with people of his constituency despite his engagements in the film industry.