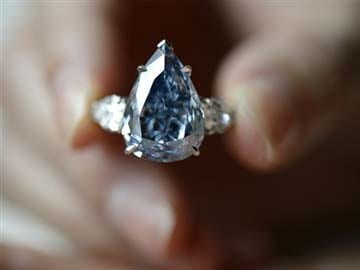 A Christie's employee holds a 13.22 carat diamond called 'The Blue', the largest flawless vivid blue diamond yet found, which is estimated to sell between 21,000,000 to 25,000,000 US Dollar, during a preview at Christie's, in Geneva, Switzerland, Friday,

New Delhi: A rare necklace, engraved with the names of Mughal emperors Akbar and Jahangir goes under the hammer in Geneva tomorrow by Christie's, which is also auctioning the world's largest flawless blue diamond, in a sale expected to total USD 80 million.

Mughal emperors were known for their love of precious stones. The tradition of engraving titles and names on stones began with the Timurids, who were the ancestors of the Mughals.

They did their engraving on diamonds, emeralds and other outstanding quality stones with large spinel beads considered to be their favourites.

These gems were not only a symbol of the opulence and dignity of the empire but were also treasured as protective talismans.

The Museum of Islamic Art in Qatar exhibits an important necklace with eleven Mughal spinel beads with a total weight of 877.23 carats. Three of them engraved with the names of Emperor Jahangir and one with that of Emperor Shah Jahan.

The diamond leads the 250 lot strong sale, estimated to mop up a total in the region of USD 80 million, Christie's said.

Six months earlier, Christie's Geneva sold 'The Orange' the largest fancy vivid orange diamond in the world for USD 35.5 million, a global record for an orange diamond and a world auction record price per carat for any diamond at USD 2.4 million.

The sale will also feature many important coloured and colourless diamonds such as the 5.50 carat 'The Ocean Dream', the largest fancy vivid blue-green diamond in the world to be auctioned, with an estimate of USD 7,500,00- USD 9,500,000.

'The Rajah Diamond' a 26.14 carat old-mine brilliant-cut diamond is amongst the 14 jewels that are being auctioned under 'A Passion for Jewels: Collection of an European Gentleman'.

Promoted
Listen to the latest songs, only on JioSaavn.com
Another section of the sale 'Noble Jewels' features a natural pearl and diamond necklace estimated at USD 550,000 - USD 700,000 and was orginally in the personal jewellery casket of Queen Elizabeth of Prussia.