Hindus Have No Aspiration Of Dominance: RSS Chief Mohan Bhagwat

The second World Hindu Congress marks the commemoration of the 125th anniversary of Swami Vivekananda's historic speech at the Parliament of the World's Religions in 1893 in Chicago. 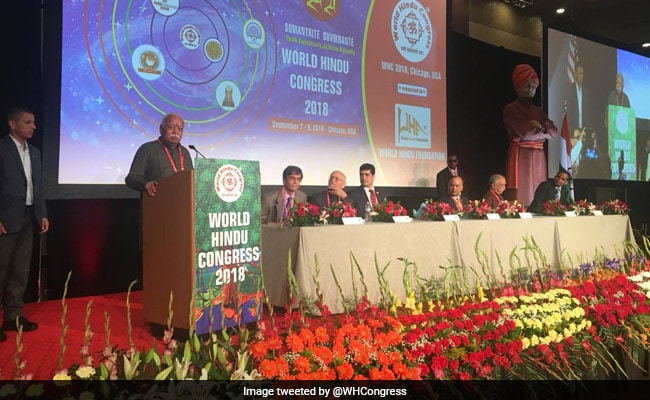 Hindus have no aspiration of dominance and the community will prosper only when it works as a society, Rashtriya Swayamsevak Sangh or RSS chief Mohan Bhagwat said today, urging community leaders to unite and work for the betterment of mankind.

Addressing a gathering of around 2,500 delegates attending the second World Hindu Congress in Chicago, Mr Bhagwat said one of the key values to bring the whole world into a team is to have controlled ego and learn to accept the consensus.

The second World Hindu Congress marks the commemoration of the 125th anniversary of Swami Vivekananda's historic speech at the Parliament of the World's Religions in 1893 in Chicago.

"If a lion is alone, wild dogs can invade and destroy the lion. We must not forget that. We want to make the world better. We have no aspiration of dominance. Our influence is not a result of conquest or colonisation," Mr Bhagwat said.

The RSS leader also said a sense of idealism is good and described himself not as "anti-modern", but instead, as "pro-future". He also described Hindu dharma spanning both "ancient and post-modern".

"Hindu society will prosper only when it works as a society," he said at the conference inspired by the Hindu principle 'Sumantrite Suvikrante' or 'Think Collectively, Achieve Valiantly'.

"One of the key values to bring the whole world into a team is to have controlled ego and learn to accept the consensus. For example, Lord Krishna and Yudhishtra never contradicted each other," Mr Bhagwat explained.

In this context, he alluded to the war and politics in the Hindu epic Mahabharata, and said politics cannot be conducted like a meditation session, and it should be politics.

He urged the conference attendees to discuss and evolve a methodology to implement the idea of working collectively.

He also said that Hindu society has the largest number of meritorious persons. "But they never come together. Coming together of Hindus in itself is a difficult thing," he said.

"We have to come together," Mr Bhagwat said, noting that all the people need not to register under one umbrella.

He also said that Hindus had suffered for thousands of years because they forgot to practice the basic principles and spiritualism.

Addressing the congress on the theme drawn from the Mahabharat, 'Think Collectively, Act Valiantly,' Mr Bhagwat highlighted the need for such an action, and how Hindus should work together.

He went on to say that in Hindu dharma, even a pest is not killed, but controlled instead. "Hindus don't live to oppose anything. We even allow pests to live," said Mr Bhagwat, adding, "There are people who may oppose us. You have to tackle them without harming them."

SP Kothari, chair of World Hindu Congress, said he and many speakers attending the conference received calls and petitions from organisations and individuals to withdraw from the World Hindu Congress claiming that some of its organisers are "socially and religiously divisive."

"I categorically reject this supposition," Mr Kothari said. "I urge them to listen to my talk and reflect on whether it is tainted with hate. I have chosen to disregard those petitions as originating from a lack of complete understanding of the Word Hindu Congress," Mr Kothari said.

"Hindus must reform and be in the forefront in eliminating social and economic inequality, fostering cooperation among those with ideas and resources, and view commerce as a means to furthering Hindu dharma for a better tomorrow," he said.

Vice-president of the Republic of Suriname, Ashwin Adhin, in his address said, "We as Hindus never forsake our mission. Hindus have always been the missionaries of renunciation and service."

"Words like peace, harmony and spirituality do not appeal to ordinary people easily and they have to be framed in the right perspective terms so that they become established in people's mind," Mr Adhin said.

Addressing the "confluence of Hindu leadership who have come to connect, share ideas and inspire one another and impact the common good," World Hindu Congress coordinator Abhaya Asthana stated that we have gathered to reaffirm the same message of diversity, cooperation and universal acceptance uttered by Swami Vivekananda 125 years ago.

World Hindu Congress, he stated, is not an event, but rather a community movement. It seeks to encourage Hindus around the world to ascend to the highest levels of excellence.

Speaking at the confrence, actor Anupam Kher said Hinduism is a way of life and one becomes a Hindu by living like one. "Tolerance was the centerpiece of Vivekananda's message. Despite being refugees in their own country, Kashmiri Pandits have practiced tolerance for 28 years like nobody ever has," he said.

"As a Hindu, it pains me deeply to see how half knowledge and ignorance are trying to destroy one of the world's oldest, most peaceful religions," he said.