Working On Agreement To Produce Films With India: Russian Envoy

Russian ambassador to India Nikolay Kudashev also announced a grand cultural event that will bring some of the most iconic Russian musical and art forms to India over the next two months. 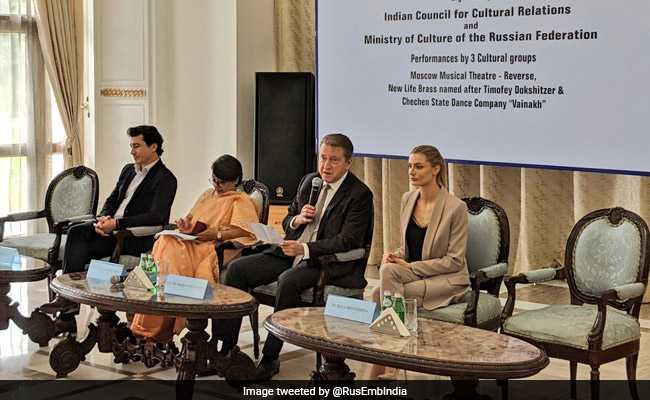 Russia and India are working on an agreement to "jointly produce" films to improve ties between their respective citizens, Russian ambassador to India Nikolay Kudashev said on Friday

Mr Kudashev said that the two countries have an age-old history of cultural collaboration.

He also announced a grand cultural event -- Days of Russian Culture in India -- that will bring some of the most iconic musical and art forms to India over the next two months.

"The two nations have a special affection towards each other, with a history of cultural collaboration that goes long back. Some of the illustrious names are Rabindranath Tagore and Leo Tolstoy, and many other distinguished sons and daughters of both the countries, representing our ties," he said.

"It will open this Sunday with a breathtaking performance 'Reverse' by the Moscow Musical Theater. It will blur the boundaries between dramatic and classic, and the circus performances," Mr Kudashev told reporters.

The 75-minute production has been created by young Russian directors Andrey Koltsov and Irina Drozhzhina, with participation of Debra Brown, the Emmy Award-winning Canadian choreographer, officials at the embassy said.

Asked if cinema is also going to be part of the mega event, the ambassador said, "Some wonderful events are lined up from musical band performances to a famous dance group performing in India."

"As per cinema, both sides (Russia, India) are working on an agreement, kind of a treaty to produce films jointly," he said.

There is an Indian channel in Russia which brings Bollywood films to viewers in the country on a daily basis. Russian people love Indian films, he added.

Emphasising the importance of cinema in promoting people-to-people ties, Mr Kudashev said a film festival was recently held in India showcasing Russian films, in Delhi, Mumbai and Pune, which was very well received.