Addressing 430 trainee civil servants near the Statue of Unity at Kevadiya in Narmada district, PM Modi asked them to try to bring a lasting solution to a bigger problem instead of attempting to tackle many problems simultaneously. 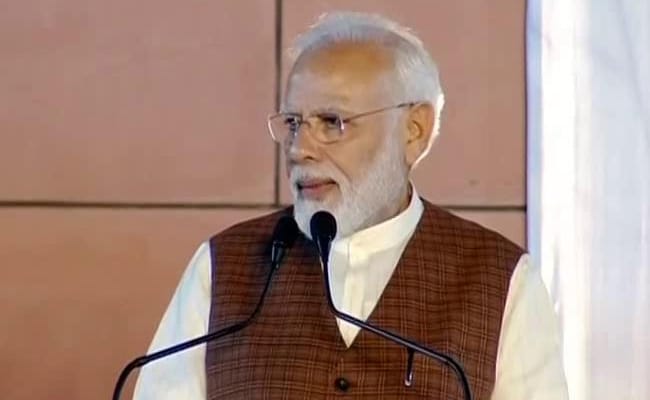 PM Modi said no bureaucratic posting should be seen as a punishment rather it should as an opportunity.

Addressing 430 trainee civil servants near the Statue of Unity at Kevadiya in Narmada district, PM Modi asked them to try to bring a lasting solution to a bigger problem instead of attempting to tackle many problems simultaneously.

"The presence of silos and hierarchy doesn't help our system. Whoever we are, wherever we are, we have to work together for the nation," he added.

"During your service, try to focus on one district-one problem-total solution. Instead of trying to solve all the problems at once, solve one problem and win the trust of people. This will automatically lead to greater participation of people," said PM Modi.

Prior to his address near the statue, dedicated to Sardar Vallabhbhai Patel, in the evening, he interacted with trainee officers of the 94th Civil Services Foundation Course at ''Aarambh'' conference held at Tent City near Kevadiya.

"Bureaucracy and system are used in negative terms now a days. You do not have to prefix ''bad'' before these words. Though many officers are very honest, a negative perception has been built.
"You need to take the bureaucracy out of this image.

Instead of ''hard power'', make ''soft power'' your identity. Implement a simple system right from giving an appointment till hearing," said PM Modi.

He urged budding bureaucrats to restart some forgotten past practices such as night halt for district collectors and passing on notes, the wherein outgoing officer used to hand over a note to the successor containing important information about work done till date and mentioning present issues.

The PM said though social media is not always reliable, it can still be used as a tool to get feedback from people.

"You also need to listen to your dissidents. This will help you in creating depth in your vision. Sitting in AC cabins, everything looks alright. Civil servants have their own circle of officers.

"This will prevent you from understanding the real problems being faced by people. You all need to come out of this comfort zone and connect with people," said PM Modi.

He said bureaucrats should always strive to make the life of common people easier and comfortable. "Always keep in mind that you owe to this country and its people. You are there because of them. So always try to make their lives easier.

"Today's citizens are more aware, more evolved and more sensitive. They are always ready to take up causes upon one request from the government. Thus, you need to bring in ''ease of living'' for them. You need to be proactive to make their lives easier," he said.

On the Centre's vision of making India a USD 5 trillion economy in the next five years, PM Modi said bureaucrats can play a crucial role in achieving this target by focusing on promoting economic activities at district level.

"You need to take timely and clear decisions to achieve big targets. Some officers hesitate to take decisions.

This ultimately costs the country. "We do not expect the status quo from you. And, we are also bringing in various administrative reforms to ensure that you work freely," said PM Modi in his address.

These 430 trainee civil servants are at Kevadiya since the last one week as part of the Aarambh Foundation Course, jointly organised by the Department of Personnel and Training and the Lal Bahadur Shastri National Academy of Administration, Mussoorie.

PM Modi, during his interaction with these officers, said "This course, Aarambh, is nation-centric and future-centric. "It will usher a paradigm shift in administration, whereby people stop working on silos. Instead, people work together and in a comprehensive manner," he said.

On the occasion, PM Modi recalled the contribution of independent India's first home minister, Sardar Patel, in the development of civil services.

"The Indian Civil Service (now called Indian Administrative Service) owes a lot to Sardar Patel. From here in Kevadia, where the ''Statue of Unity'' is, may we all find inspiration and vigour to do something for our nation," he said.