Rahul Gandhi, who is trained in the Japanese martial art Aikido, took a bunch of students on stage at St Theresa's College and showed them a 'principle' of the art. 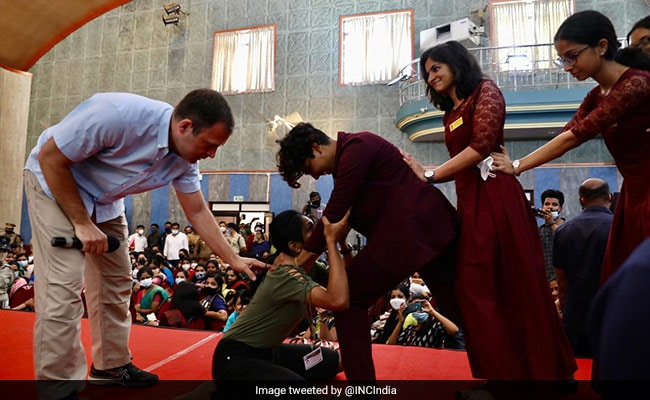 Congress leader Rahul Gandhi turned a martial art instructor today during his visit to a college in Kerala on the request of a student.

The 50-year-old Wayanad MP, who is trained in the Japanese martial art Aikido, took a bunch of students on stage at St Theresa's College and showed them a 'principle' of the art.

For around 10 minutes, the stage turned to a 'dojo' where Mr Gandhi demonstrated how one woman can resist being pushed by some seven others by using their energy to hold the ground.

He helped the young woman get her posture correct and showed her the technique of the Aikido principle. He sat with her on the stage demonstrating what she had to do.

I'll tell you a secret that men will never tell you, women are much more powerful than men.

"I'm going to show you the Congress party now," Mr Gandhi quipped as he called on for more students to push the woman, in position on her knees, to resist the attack. He compared her to his party, apparently referring to the many hurdles Congress faces from other parties.

The Congress shared pictures and the whole video of the interaction on social media.

After the demonstration, the former Congress chief also said women are way more powerful than men.

"Society wants to convince you that you are less powerful. Don't buy it. No woman in this room should be under the illusion that they are less powerful," Rahul Gandhi said and added that society treats women "very badly" in India.

Mr Gandhi is in poll-bound Kerala today where his first stop was Kochi.

He has been campaigning extensively in the state and interacting one-on-one with locals. Just weeks ago, he took a swim in the sea with fishermen in the state's Kollam.

In another interaction with students in Tamil Nadu, Mr Gandhi took a push-ups challenge with a young girl, and even pulled off an one-arm push-up.