Shortly before he visited Shaheen Bagh, Chandrashekhar Azad spoke to NDTV and said the citizenship law discriminated against Dalits and tribals as much as Muslims 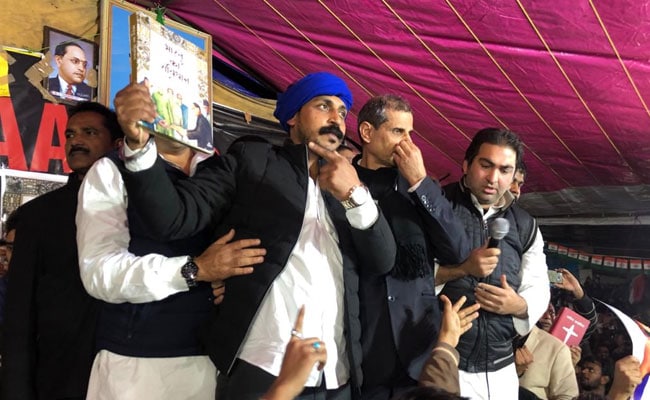 Bhim Army chief Chandrashekhar Azad visited Delhi's Shaheen Bagh Wednesday evening to deliver a dramatic warning to the government over the citizenship law, declaring the centre would have to "go over our corpses" if it wanted the law implemented. Mr Azad also praised the women of Shaheen Bagh, who have braved a bitterly cold winter to participate in a weeks-long sit-in protest, and said he would travel across India to urge more women to "fight for the unity of India and "make every bagh (garden) a Shaheen Bagh".

"Ambedkar said women will lead. Today, when the Constitution is in danger, women are leading the country and fighting for it," Chandrashekhar Azad said in his speech, which came a day after the courts modified his bail order to allow him to return - he had earlier been barred from entering for four weeks.

"If the government wants to implement this law (the citizenship law), they will have to go over our corpses," Mr Azad, who was arrested last month after leading a massive protest against the citizenship law at Delhi's iconic Jama Masjid and charged with arson, rioting and inciting violence, said.

Mr Azad also hit out at claims the Shaheen Bagh protest had severely impacted daily life in the capital, particularly those who commute to and from Noida; the protest has blocked a key road connecting these two regions and caused congestion on alternative routes, such as the Delhi-Noida-Delhi Flyway.

"Where in Delhi do you not find traffic jams? I accept that there is some difficulty... but tell me honestly, were you not troubled by demonetisation too?" Mr Azad asked critics of the Shaheen Bagh protests.

"In the next 10 days there will be 5,000 Shaheen Bagh-like protests in the country," he declared.

The Shaheen Bagh protest inspired a similar one in Uttar Pradesh's Lucknow, where around 50 women began a sit-in demonstration only to be forcibly dispersed by the cops.

Shortly before his visit to Shaheen Bagh Mr Azad, a.k.a Raavan, spoke to NDTV and said the citizenship law discriminated as much against Dalits and tribals as it did against Muslims.

"The NRC, NPR and CAA are the most anti-Dalit. They are also anti-OBC and anti-tribals, because these people will suffer the most," he claimed, accusing Home Minister Amit Shah, who yesterday said the government would not back down "no matter who protests" of working from an "agenda".

The Citizenship (Amendment) Act, or CAA, which makes religion the test of citizenship for the first time, has been defended by the government as a legislation that will help non-Muslim refugees fleeing religious persecution from three Muslim-dominated countries.

Critics, however, say it discriminates against Muslims and violates secular tenets of the Constitution. They also point to the NRC and the NPR and say these two programmes, in conjunction with the CAA, will further target the Muslim community.

Widespread protests have broken out across the country over the CAA, the NRC and the NPR, with lakhs taking to the streets and several non-BJP states refusing to implement either of the three; today the Supreme Court heard a whopping 140 anti-CAA petitions.