Citizenship (Amendment) Act: Twenty-one people have died in different parts of Uttar Pradesh during protests against citizenship law in the last one month, the highest in the country.

About 50 women began the protest against the CAA at clock tower on Friday night.

Dozens who are participating at an indefinite sit-in against the Citizenship (Amendment) Act or CAA at Lucknow's iconic clock tower, which started on Friday night, have been identified and accused of "rioting" and "unlawful assembly" in three criminal cases filed by the Lucknow Police. Among those named by the cops are mostly women, including daughters of renowned Urdu poet Munawwar Rana - Sumaiya Rana and Fauzia Rana.

About 50 women began the sit-in demonstration against the citizenship law on Friday night at the clock tower. The crowd gradually swelled to thousands as more women and children joined them.

In the police complaints, more than 100 unnamed protesters have also been accused of "disobedience to order duly promulgated by public servant", "assault or criminal force to deter public servant from discharge of duty".

The incident that is believed to have formed the basis of the criminal cases is a complaint by a woman constable who said she was heckled by protesters. The protesters, who allegedly pushed her and misbehaved with her, have been accused of rioting and unlawful assembly. 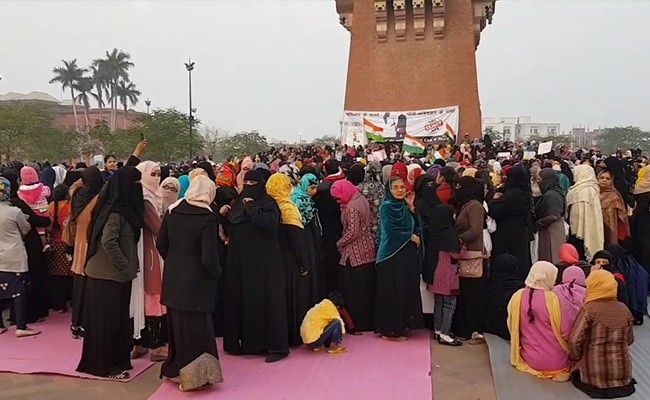 There have been no reported incidents of vandalism during the clock tower protests.

On Saturday night, cops were accused of taking away blankets and food meant for those protesting at the iconic site. Dismissing the allegations in a statement, Lucknow police later said: "Do not spread rumours" but added that "blankets were seized after due process".

There have been no reported incidents of vandalism during the clock tower protests.

Last month, when violence broke out amid anti-CAA protests in Lucknow, several prominent activists, including Sadar Jafar, were named by police in similar criminal cases. They were accused of "attempt to murder" among other charges. However, later during the bail hearings, cops said they did not have enough evidence against them.

Twenty-one people have died in different parts of Uttar Pradesh during protests against citizenship law in the last one month, the highest in the country.

The CAA, which cleared the parliament last month, makes religion the test of citizenship in India for the first time. The government claims that it will help minorities from three Muslim-dominated countries - Pakistan, Bangladesh, Afghanistan - to get citizenship if they fled to India because of religious persecution before 2015. Critics across the country have said it is designed to discriminate against Muslims and violates the secular principles of the constitution.