'A Fight For Children's Future': Women At Shaheen Bagh On Citizenship Law

Women of Shaheen Bagh: It isn't just Muslim women protesting at Shaheen Bagh; the relay sit-in has support from all communities and on Sunday Hindus, Muslims, Christians and Sikhs united to read out the holy books of their religions

At 9.30 pm every night for 30 days now, when most people are safe at home and relaxing after dinner and roads wear a semi-deserted look, 46-year-old Rizwana Siddiqui is preparing to brave the freezing cold of this Delhi winter and spend the whole night at Shaheen Bagh, where a group of courageous and principled women have led a remarkable sit-in protest against the controversial citizenship law.

Participating in the protest demands more from Rizwana than the fortitude to brave winter nights - before she leaves home she must ensure dinner is ready. She is also an asthma patient and must take her medication and use a nebuliser before heading out. She must also remember to pack an inhaler in the sweater she wears to the protest site. None of this would be possible without the support of her family, she says.

"If I did not have his (referring to her husband) support it would not have been possible. Whatever I manage to prepare he is happy with it. Sometimes I am unable to prepare lunch after coming back. For a wife it is important to have such cooperation from the husband," Rizwana explains to NDTV.

Khalid Jamal Siddiqui, her 52-yer-old husband adds: "I can't contribute more because I have to go for my job every day. But my wife can manage to go and she feels for the cause from the bottom of her heart. I appeal to others as well if your mothers and sisters want to go you should encourage them and not discourage them".

At 10 pm, after the couple has finished their dinner, Rizwana takes a 15-minute e-rickshaw ride to Shaheen Bagh. During the ride she tells NDTV she is a housewife and the mother of two sons who work outside Delhi.

She says she never previously participated in protests but was inspired to do so after the events of December 15 - when what started as a peaceful march by students from nearby Jamia Millia Islamia ended with Delhi Police barging into the campus and beating students.

"When I went ahead and got to know students had been lathi-charged... stones, glass, blood and lathis were on the road. On reaching home I got to know about the brutality... I screamed and cried," Rizwana tells NDTV.

"Campuses are supposed to be safe and parents send children to study there. Somebody lost his eye... others suffered fractures of their arms or legs. What are we doing?" she asks. 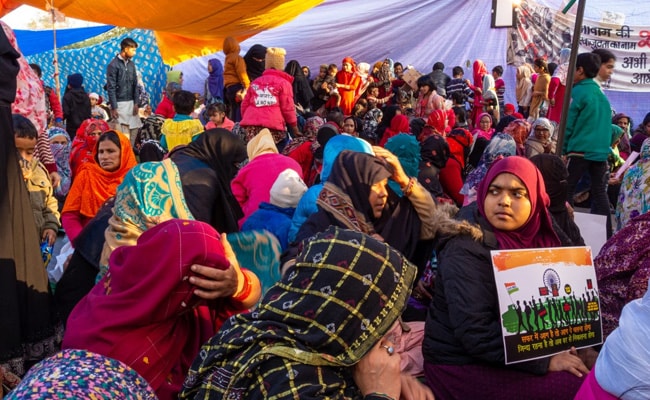 Hitting out at laws that divide on religious line, she also calls on mothers to take to the streets, asking: "If our kids won't be alive what is the point of our life then?"

On reaching the protest site Rizwana camps there for the next six hours, during which time she helps other women in the distribution of food and cleaning up, while listening to the poetry that is recited all night long. She doesn't leave till 4 am, when she shares a ride with a female friend for safety reasons.

This is not just the story of Rizwana Siddiqui. There are several such women, some of whom even come with their children, who will not be silenced. Even on the coldest December night in Delhi in 100 years, the women of Shaheen Bagh stand tall and defiant.

Rehana, 28, brings her 20-day-old daughter and sits in quiet protest every day from 1 pm to 9 pm. "It is a fight for the future of our children," she says. 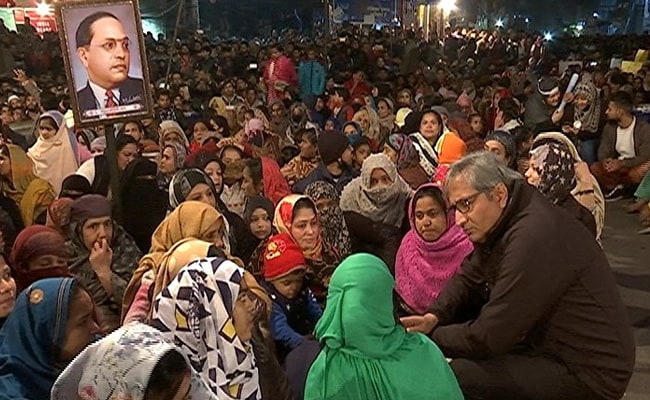 On Sunday Hindus, Muslims, Sikhs and Christians protesting at Shaheen Bagh prayed together

Asma Khatun, 90, sits every day from 3 pm to 9 pm. "We are fighting for the Constitution and for our brothers. I want to tell those who ask me for proof show me what were the names of your ancestors. I can show you the names of my last 7 generations," she says.

And it isn't just Muslim women who are protesting. The relay sit-in has support from all communities - on Sunday Hindus, Muslims, Christians and Sikhs performed rituals and united to read out the holy books of their religions.

Ishika Rajveer, a student of the Lady Shri Ram College who came to Shaheen Bagh with several packs of biscuits for the protesters, tells NDTV: "These women have been doing a commendable job. I really wanted to lend them support. Giving them food is the bare minimum one can do".