The former BJP MP, who quit the party before the Lok Sabha election this year, was similarly effusive in his praise of Sonia Gandhi's children - Rahul Gandhi and Priyanka Gandhi Vadra 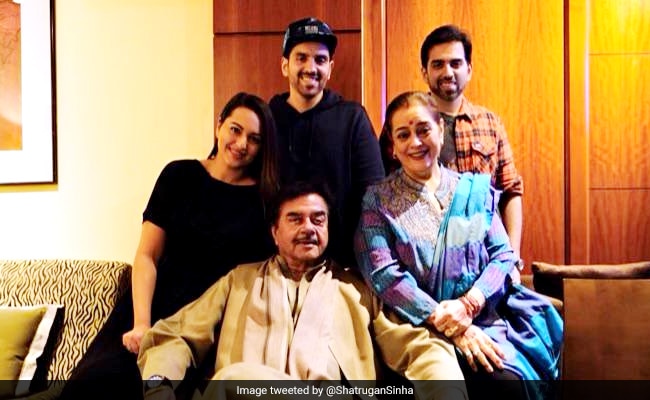 Congress's Shatrughan Sinha lavished praise on party President Sonia Gandhi today, on the occasion of her 73rd birthday, calling her a "gracious... woman of substance" whose "enormous" contributions had "inspired many". The former BJP MP, who quit the party before the Lok Sabha election earlier this year, was similarly effusive in his praise of Ms Gandhi's children - Rahul Gandhi and Priyanka Gandhi Vadra - describing Mr Gandhi as "energetic" and Ms Gandhi Vadra as "bold, beautiful and intelligent".

In his tweet, posted at 3.10 pm, Mr Sinha extended birthday wishes for Sonia Gandhi from his entire family and accompanied the message with a dramatic family portrait.

"Warm birthday wishes from the #Sinhafamily for the woman of substance, courageous, gracious President #Congress, #SoniaGandhi. Her contributions have been enormous & have inspired many," Shatrughan Sinha, who unsuccessfully contested Bihar's Patna Sahib Lok Sabha seat against the BJP's Ravi Shankar Prasad, said.

#Priyanka Gandhi Vadra. May you be blessed with happiness, peace & a healthy long life ahead.#HappyBirthdaySoniaGandhi

"Proud mother of energetic, forthright #RahulGandhi & bold, beautiful, intelligent #Priyanka Gandhi Vadra. May you be blessed with happiness, peace & a healthy long life ahead. #HappyBirthdaySoniaGandhi," the second half of Mr Sinha's message read.

Born on December 9, 1946, Sonia Gandhi, former Prime Minister Rajiv Gandhi's wife, is the longest serving president of the Congress; she has been elected since 1998 according to the party's official website.

On Sunday sources within the Congress told news agency PTI she would not be celebrating her birthday today. Sources said she had decided not to do so as she was saddened by growing incidents of rape and violence against women in the country.

That, however, did not stop political leaders, from both the Congress and opposition parties, from offering their wishes.

The Congress, on its official Twitter handle, praised Ms Gandhi for her "strength, dignity, compassion and grace". Former Karnataka Chief Minister Siddaramaiah was among other leaders who wished Ms Gandhi on her birthday.