SM Krishna Moves From Congress To BJP. Why He Is A Big Asset 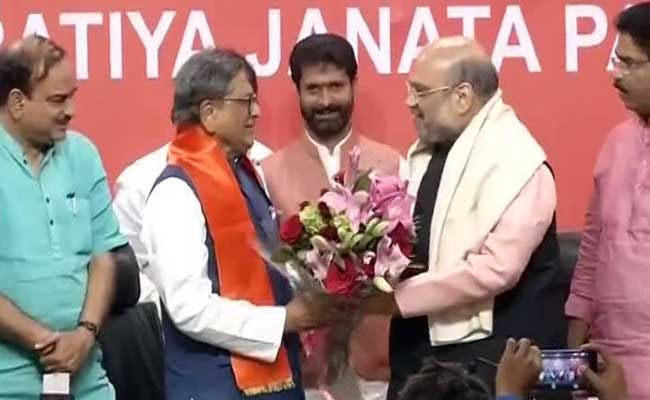 SM Krishna joined the BJP after 46 years in the Congress.

New Delhi: Uttar Pradesh won, the BJP is now looking south. In preparation for next year's key battle in Karnataka, the party today inducted former Karnataka Chief Minister SM Krishna, who had quit the Congress in January. The party, which has a government in every zone, is looking to regain Karnataka, which it lost in 2013 when its mass leader BS Yediyurappa quit and contested polls at the head of his own Karnataka Janata Paksha.

Of all the southern states, the BJP is closest to power in Karnataka. It is now trying to improve its strength with the induction of leaders from other party - a strategy that has served it well in the elections in Assam and Uttar Pradesh.

Today, as Mr Krishna was formally inducted, BJP chief Amit Shah said, "He will increase our strength in Karnataka and (his entry) is also a signal that leaders with clean image are joining the BJP. We will honour Krishna's seniority".

The 84-year-old, who had been one of the close aides of Indira and Rajiv Gandhi and held key posts at the Centre and state, had been hurt that many in the party's state unit considered him a spent force and sidelined him.

But Mr Krishna is seen as an influential leader in Bangalore -- the heart of Karnataka which acts as a decider. The city has three Lok Sabha seats and 24 assembly seats. He is also extremely popular as a leader of the powerful Vokkaliga caste in the Mandya, Mysore and Tumkur region, seen as the caste stronghold.

He is, in fact, is the first big Vokkaliga leader in the BJP ranks. The party's central minister Sadanand Gowda is from the same caste, but he happens to be from the coastal Mangalore belt and not the Mandya-Tumkur heartland, where the Vokkaliga vote is a deciding factor in elections.

So far, the BJP was too dependent on the Lingayat vote commanded by Mr Yedyurappa, which limited its appeal in regions dominated by other castes.

But the Lingayats, who powered the victory of the BJP in 2008, are also on the watch, concerned about the possibility of a rise in Vokkaliga influence in future.

The BJP will also benefit from Mr Krishna's knowledge of the Congress - most of the party legislators from the concerned districts got ticket due to his backing and won due to his influence.

For the Congress, his shift raises concerns about the large-scale defection from the party's state unit as the Siddaramaiah government comes up for re-election.
Comments
SM KrishnaSM Krishna Quits