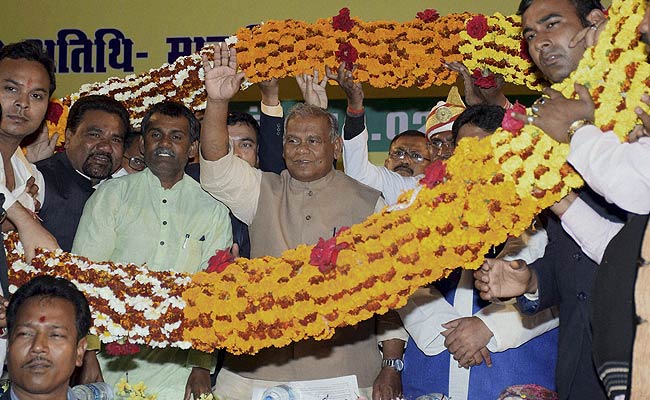 Bihar Chief Minister Jitan Ram Manjhi greeted by his supporters at a function in Patna on Thursday. (Press Trust of India)

On the eve of the crucial floor test in the Bihar Assembly for Jitan Ram Manjhi, Janata Dal (United) chief Sharad Yadav mocked the Chief Minister and said his dreams of proving his government's majority will never be fulfilled.

"Mungeri Lal ke hasin sapne kabhi pure nahi honge (his dreams will never be fullfilled)," Mr Yadav said on Thursday. He has already reached Patna for Nitish Kumar, who hopes to take over as Chief Minister.

Mr Yadav has already expelled Mr Manjhi from the party after he refused to step down to allow the return of Mr Kumar.

The BJP has in a whip has asked its 87 legislators to vote in support of Mr Manjhi who needs 117 votes to remain Chief Minister. He has 12 lawmakers from the JD(U) in his camp and is counting on the support of three Independents. So even with the support of the BJP, he is poorly placed to win the trust.

Both Mr Kumar and Mr Manjhi organised dinner for their supporting MLAs on Thursday night.

The Janata Dal United, or JD(U), has decided to boycott the Governors' Speech ahead of the trust vote to protest against his decision to read a speech prepared by a minority government.  The legislators have decided to sit it out in the Assembly lawns and during the trust vote, they will keep their faces covered.

On Thursday evening Mr Manjhi controversially said in a public address, "You want to become a minister, come to me." It seen as his effort to show that he is being victimised because he is Mahadalit, one of the state's poorest castes.

Promoted
Listen to the latest songs, only on JioSaavn.com
The support of Mahadalits is vital for political parties in Bihar and the BJP is playing the same card. It wants to project itself as a party that has backed a Mahadalit leader against the odds because of its commitment to them.

Bihar votes for its next government later this year. The JD(U) wants Mr Kumar, 63, to be the face of its campaign for the election. The party has allied with Lalu Prasad Yadav's Rashtriya Janata Dal or RJD to take on the BJP.