The BJP and JD(U) split as allies in 2013. Mr Kumar joined hands with the BJP two years later after running a government with regional heavyweight Lalu Yadav and the Congress.

Bihar Chief Minister Nitish Kumar on Tuesday sought to project a united face amid the war of words between his deputy Prashant Kishor and ally BJP over the seat-sharing for next year's assembly election in the state.

"Sab theek hai (all is well)," Mr Kumar was quoted as saying on the alliance in the state.

Prashant Kishor, whose criticism for the BJP started with the passage of the Citizenship (Amendment) Act and the National Register of Citizens (NRC), had recently suggested that his party must get a lion's share in seat distribution for the polls. "If we look at the 2010 assembly polls, which the JD (U) and the BJP had last contested together, the ratio was 1:1.4. Even if there is a slight change this time, it cannot be that both parties fight an equal number of seats," Mr Kishor said on Sunday.

His comments drew a stinging remark from the BJP, which accused Mr Kishor of hurting the National Democratic Alliance with his adverse remarks. "A person running a business for profit first tries to create a market for his service, thinks about the welfare of the country later," Bihar Deputy Chief Minister Sushil Modi of the BJP tweeted, without naming Mr Kishor.

"It has been decided that the 2020 Assembly election will be contested under the leadership of Chief Minister Nitish Kumar and Prime Minister Narendra Modi. The decision regarding seat sharing will be taken by the leadership when the time comes. There is no problem at all," Mr Modi tweeted.

Mr Kishor's new demand indicates a shift in Nitish Kumar's party's strategy from the 2015 and 2019 polls in which the JD(U) has insisted on even seat sharing arrangement with its alliance partners. Despite having two lawmakers in parliament, the JD(U) had made the BJP to agree to an even seat-sharing arrangement in the 2019 national polls; Nitish Kumar also contested the 2015 assembly elections with the RJD on an equal sharing formula. In both the elections, the JD(U) trailed its alliance partners. 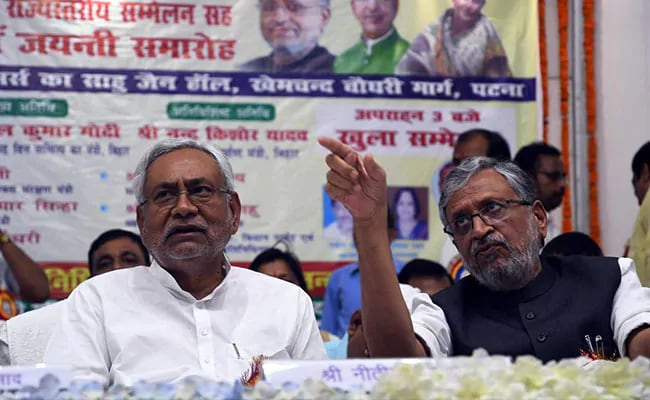 Prashant Kishor on Monday said Sushil Modi owed the deputy chief minister's chair to "circumstances" that helped him enjoy power despite his party having lost the last assembly polls in 2015.

On Tuesday morning Mr Kishor made a comeback to the senior BJP leader's jab. "In Bihar, Nitish Kumar's leadership and the role of the JD(U) has the largest party has been decided by the people of Bihar and not by any other party  or its leaders. Even after the 2015 defeat and becoming deputy Chief Minister, it is a pleasant experience to hear about political dignity and ideology from Sushil Modi," he tweeted in Hindi.

Mr Kishor has vociferously argued against the new law championed by the centre which for the first time introduces religion as a test for citizenship. While his boss, Mr Kumar, instructed his party to support the Citizenship Amendment Act in parliament, he has since distanced himself from the controversial new rules at the urging of Mr Kishor who says that the government's intent of introducing a National Register of Citizens must be resisted by parties like his.

Mr Modi is not the only leader to attack Mr Kishor over his remark. JD(U) MP RCP Singh, in a veiled attack, said no one has been authorised to speak on the issue. "There are some people who issue such statements to hog limelight. The fact remains that it (seat-sharing) will be finalised in a cordial atmosphere," he said.

The BJP and JD(U) split as allies in 2015. Mr Kumar joined hands with the BJP two years later after running a government with regional heavyweight Lalu Yadav and the Congress.