"Bhobishyoter Bhoot" revolves around a group of ghosts, including a politician, who assemble at a refugee camp and try to be relevant in contemporary times. 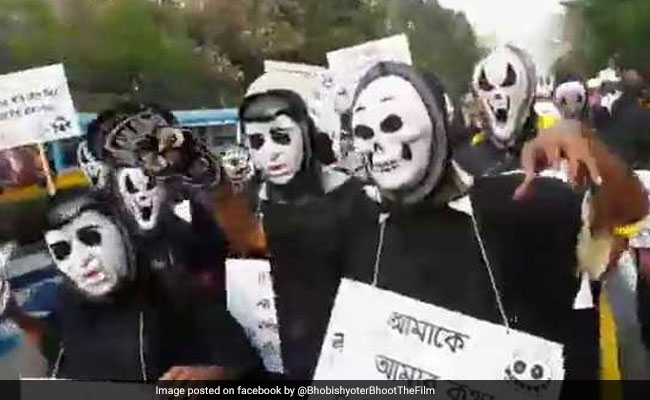 Protests were held after the film, "Bhobishyoter Bhoot", was pulled out of theatres.

The West Bengal government was fined Rs. 20 lakh by the Supreme Court today for imposing a "virtual" ban on the public screening a Bengali film. Last month, the court had asked Mamata Banerjee's government to ensure that the satirical film is screened without obstruction.

The film, "Bhobishyoter Bhoot" or "The Ghost of the Future", had disappeared from movie halls a day after its release in February 15. It was labeled by those who have seen it as a dark satire on the state of politics and politicians of every hue in West Bengal.

The top court today asked the state government to pay the amount to theatre owners who were allegedly stopped from screening the film directed by Anik Dutta from almost all multiplexes and single screen theatres earlier.

The court was hearing a petition by the film's producer which alleged that the film was taken down from a majority of theatres at the orders of the state authorities.

Justice DY Chandrachud , who was heading the Supreme Court bench, observed that this kind of action on the film was a serious matter wherein intolerance was used by the state against artistic freedom.

Chief Minister Mamata Banerjee, when asked about the film's disappearance, had snapped, "Don't ask me such questions." The producers had told the Supreme Court that the censor board had cleared the film and no one had the right to stop its screening.

Top Bengali actors, including Soumitra Chatterjee and Aparna Sen, took to the streets of Kolkata last month to protest the muzzling of a film.

"Bhobishyoter Bhoot" revolves around a group of ghosts, including a politician, who assemble at a refugee camp and try to be relevant in contemporary times.