West Bengal Assembly Election 2021: "The people of Bengal have decided that it is time for Didi's game to be over. The people want 'TMC bhagao, BJP lao, Bangla bachao'," Smriti Irani quipped. 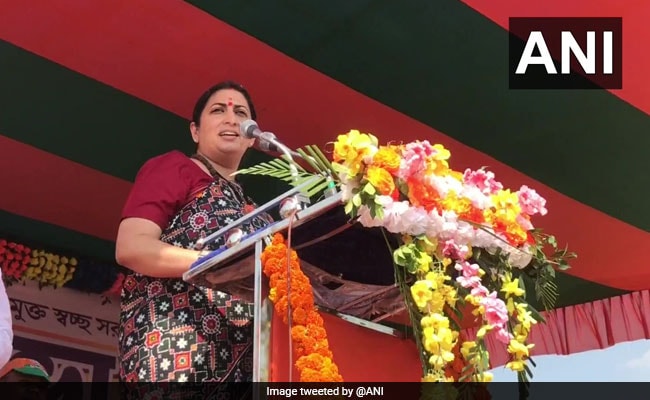 "PM Modi sent Rs 4 lakh crore from Delhi for the poor people and the development of the state, but Didi, when you were supporting the previous Congress governments at the Centre, how much money did you spent?... Didi has supported those who have looted India's treasury and have raised their voices against the nation," she said.

"The people of Bengal have decided that it is time for Didi's game to be over. The people want 'TMC bhagao, BJP lao, Bangla bachao'," she quipped.

Smriti Irani also said that since coming to power, the Mamata-led state government, for the first time, disallowed immersion of Maa Durga idol and Saraswati Puja celebrations in West Bengal.

"She is saying 'Khela hobe' (Game on), but the people are saying 'Khela shesh' (Game over)... The way elections are taking place, the whole country has become aware that the people of Bengal have decided that TMC will be departing this time. ''Pishi" (Aunt) and 'Bhaipo' (Nephew) are going, and the BJP government is coming to Bengal," she further mentioned, while also accusing her and TMC of playing with the dignity and life of Bengal's women and the poor.

She also urged the people to press the lotus button on March 27 and give their blessings to Samit Das.

West Bengal is likely to witness a triangular contest this time with TMC, Congress-Left alliance and the BJP in the fray.

Elections to 294-member West Bengal Assembly will be held in eight phases starting from March 27 with the final round of voting taking place on April 29. The counting of votes will take place on May 2.