India-South Korea Ties: PM Narendra Modi said that more than 600 Korean companies such as Hyundai, Samsung and LG Electronics are already invested in India and the prime minister said "we aspire to welcome many more." 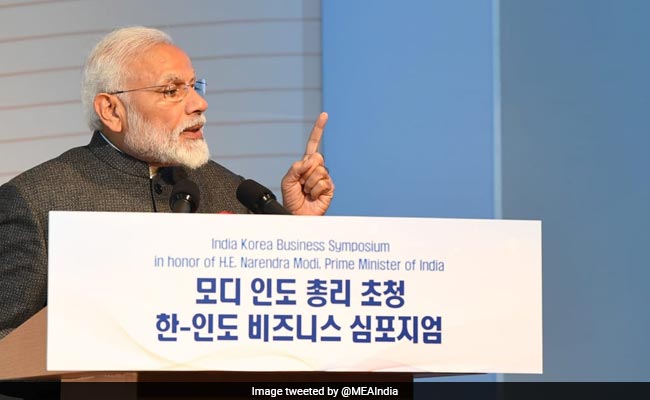 Prime Minister Narendra Modi said today that the Indian economy is based on sound fundamentals and will in the near future double in size to USD 5 trillion, as he highlighted how India is a "land of opportunities" to investors in South Korea.

"No other large economy in the world is growing at over 7 per cent year after year," he said at the India-South Korea Business Symposium in Seoul during his visit to the Republic of Korea.

Over 600 Korean companies such as Hyundai, Samsung and LG Electronics are already invested in India and the prime minister said "we aspire to welcome many more."

"(Car maker) Kia is soon to join this club too," he added.

To ease business visits, India since October last year is giving Korean nationals visa on arrival, he said. "The fundamentals of our economy are sound. We are well set to become a 5 trillion dollar economy in the near future," he said.

Prime Minister Modi said hard policy decisions such as the introduction of the Goods and Services Tax or GST and opening up of more sectors has helped India jump 65 places on the World Bank's Ease of Doing Business ranking to the 77th position.

"And, we are determined to move into the top 50 next year," he said.

"We are one of the most open countries for foreign direct investment today. More than 90 per cent of our sectors are now on automatic route for approval. As a result of this and the confidence in India, we have received FDI worth over USD 250 billion over the past four years," PM Modi said.

India, the world's sixth largest economy at USD 2.5 trillion, is changing from being agriculture-dominated to an economy led by industry and services and one that is globally inter-linked which rolls out red carpet instead of red tape, the prime minister said.

"India has emerged as a land of opportunities. While we work for realising 'the Indian Dream', we seek like-minded partners. And, among them, we see South Korea is truly natural partner," he said, inviting South Korean businesses to India.

India is among the top 10 trade partners of South Korea and India is the 6th largest export destination for Korean goods. Trade between the two nations reached USD 21.5 billion in 2018.

"The negotiations to upgrade the Comprehensive Economic Partnership Agreement have been fast-tracked to achieve the bilateral trade target of USD 50 billion by 2030," he said. "Not just trade, in investment terms also we are seeing a positive turn. And Korean investments into India have reached a cumulative figure of almost USD 6 billion."

Talking of initiatives taken by his government, the prime minister said over 300 million bank accounts have been opened for providing banking facilities to those who were without it. As much as 99 per cent of Indian households now have a bank account.

More than USD 12 billion has been deposited in these accounts, microcredit of USD 90 billion has been extended to 28 million in the last three years, USD 50 billion of government benefits directly transferred to beneficiaries and huge strides made in rural electrification, he said.

"Economic progress is closely tied to world-class infrastructure. Be it transport, power, ports, shipbuilding, housing, and urban infrastructure, there is a huge demand in India while there are strong technological capabilities and capacities in Korea. We estimate the investment requirements in infrastructure at over USD 700 billion by 2022," he said.

Prime Minister Modi said the role of the government is to provide the support system and a flagship program Start-up India with USD 1.4 billion fund for four years to create a startup ecosystem in the country has been introduced.

"Our vision of India-Korea Startup Centre will provide a hub for Korean startups and Indian talent to freely communicate. South Korean national IT promotion agency has already opened Indian offices in Bengaluru," he added.