Waterlogging In Delhi And Gurgaon After Downpour, More Rain Likely

India Meteorological Department has predicted heavy rain for parts of Delhi and Gurgaon tomorrow as well.

Delhi woke up to rain today. Waterlogging and traffic jams were caused in several parts of the city.

Submerged roads, floating cars knocking against each other and water entering people's homes, these were the scenes witnessed across millennium city Gurgaon today as the overnight light rain turned to a downpour through the day.

Some residents posted pictures of inundated apartment complexes on social media, sarcastically thanking the administration for the "lake view".

Thanks @MunCorpGurugram 4giving a "Lake" view. Our cars r enjoying brushing each other in the "lake". Thanks 4the #drains, thanks 4the waste management, thanks 4the road #construction.We always enjoy #rain thanks 2you. @FREEPVR1@Gurgaon_Tweets@HTGurgaon@TOIGurgaon#waterloggedpic.twitter.com/V0SnW17WKp

The Ambience Mall in Gurgaon was shut after a portion of it was damaged due to rain. A portion of the temporary shed built to cover the open space of Ambience collapsed due to heavy rain and fell in the fun zone area on the 3rd floor. Water entered the mall due to the collapse of the shed. The mall has been shut as a precautionary measure.

Authorities from the mall said no one was injured in the incident which happened as excess water had accumulated on the roof. The mall was closed to the public from 1.30 pm following the incident. An official statement by the mall administration said it would reopen on Tuesday after repairs.

At Gurgaon's Sheetla Mata Mandir road, devotees, including women and children, were seen wading through the water when NDTV reached the spot. One man complained, "It is very troublesome for us. It took us hours to reach here due to the traffic jam." Another said, "The public faces inconvenience all the time. They should have atleast made a proper road. There has been no development at all in these years."

Authorities who inspected the spot assured that all efforts were being made to bring respite. Sudhir Singla, MLA of Gurugram, told NDTV, "The water was 5 ft deep but it is much lower now. The whole administration is on the job."

Jitendra Garg, Joint Commissioner of Zone 2 of the municipal corporation said, "Because of the downpour, exit drains are not working properly. Within 2-3 hours, water on the road will drain out." Asked about residents' complaints that this was a recurrent issue and nothing was done to address it, he said, "We are trying to solve the problem for the long term as well."

The national capital, too, woke up to rain on Monday morning that led to waterlogging and traffic jams in several parts of the city, including the ITO and Pragati Maidan area.

The rain brought a relief from the soaring temperatures that had climbed to 42 degrees over the past couple of weeks.

A portion of the main road in Dwarka's Sector 18 caved in today and a traffic constable's car fell into the pit. Fortunately, the constable escaped unharmed. 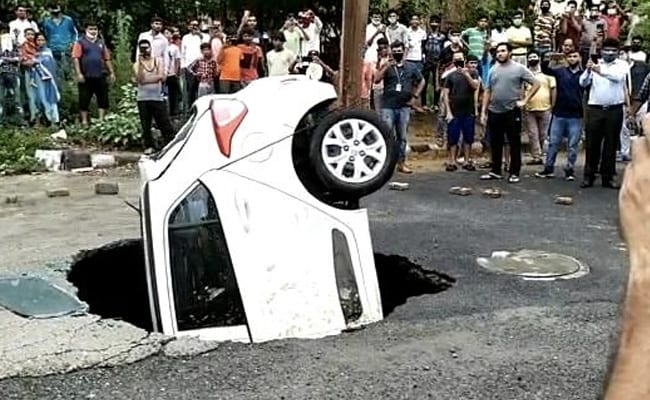 In the ITO area, the front wheels of a DTC cluster bus were stuck as a road caved in. Nobody was injured in the incident.

One death was reported in Prahladpur area of Delhi where a young man drowned, allegedly while shooting a video at a waterlogged underpass.

IMD has predicted heavy rain for parts of Delhi and Gurgaon tomorrow as well. With the roads already submerged, things are set to get tougher for the public over the next 24 hours.