The video posted by Smriti Irani on her Instagram handle became an instant hit receiving more than 53,000 likes in just six hours. 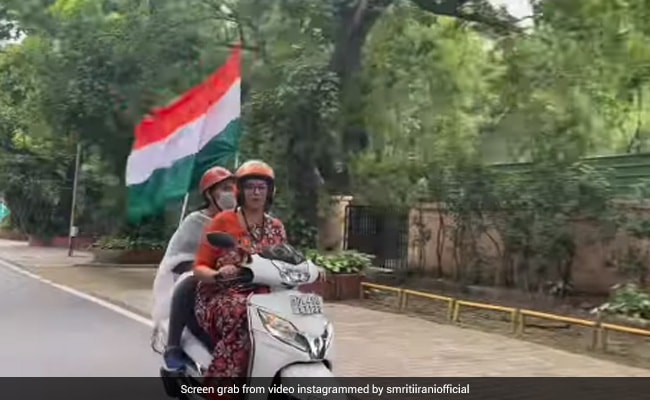 Union minister Smriti Irani posted a video of riding a scooterette to work. In the video posted on her Instagram handle, Ms Irani is seen driving a Scooty with Minister of State for Health Bharati Pawar riding pillion.

"Dropping @dr.bharatippawar Tai, MoS Health to office after a great start to the day with Tiranga Yatra," Mr Irani said in the caption of the video.

While Ms irani is seen dressed in a sari and is wearing a helmet, Ms Pawar is in a salwar kameez and holding the National Flag.

One National Flag is seen tied to the Scooty. Ms Irani is also heard saying, "Dropping Bharati Tai to work."

The video became an instant hit receiving more than 53,000 likes in just six hours. Many of the minister's followers posting positive comments. Among them is filmmaker Ekta Kapoor who commented on Ms Irani's looks saying, "How slim congrats. Ur fit." Actor Divya Seth said, "How fantastic."

Prime Minister Narendra Modi had announced on July 31 that "Har Ghar Tiranga" movement will be held ahead of the Independence Day. He appealed to the citizens to make it a mass movement by using "Tricolour" as their profile pictures on social media between August 2 and 15.

'Har Ghar Tiranga' campaign is part of 'Azadi Ka Amrit Mahotsav' to encourage people to hoist the 'tricolour' at home to mark the 75th year of India's independence.

Last month, Ms Irani had shared a video from son Zohr's graduation ceremony on Instagram and said how proud she is. She also tagged her son and wrote that his graduation "signals the advent of new possibilities.. to live your potential, to chase your dreams, to live and love responsibly, to be you .. just you".