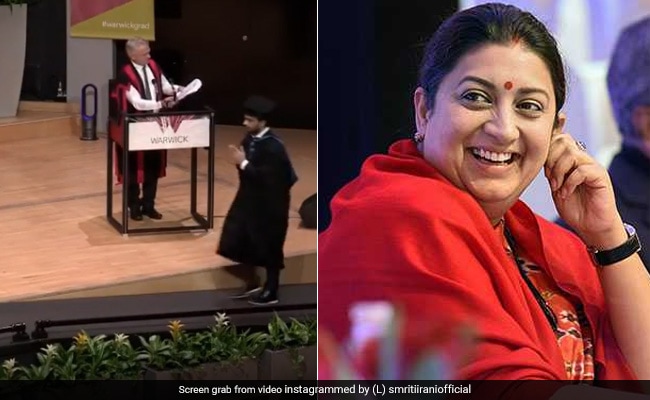 On son's graduation, Smriti Irani said she is "very proud, overwhelmed and overjoyed".

Union Minister Smriti Irani on Wednesday shared a video from Zohr Irani's graduation ceremony and said how proud she is of her son.

In an Instagram post, the Bharatiya Janata Party (BJP) minister said that she is "very proud, overwhelmed and overjoyed". She also tagged her son and wrote that his graduation "signals the advent of new possibilities.. to live your potential, to chase your dreams, to live and love responsibly, to be you .. just you".

The short clip shows Zohr Irani's name being called during the graduation ceremony. The Union Minister's son is then seen entering the frame with folded hands.

Smriti Irani married Zubin Irani in 2000. The couple have a son, Zohr, and a daughter, Zoish, together. Ms Irani is also a stepmother to Shanelle, the daughter from her husband's previous marriage.

The Union Minister often shares glimpses of her family on Instagram. Back in December, she announced Shanelle's engagement. Sharing a photo of the couple, Ms Irani wrote, "To the man who now has our heart @arjun_bhalla welcome to our madcap family .. bless you for you have to deal with a crazy man for a father in law & worse...me for a Saas...(you have been officially warned) God bless @shanelleirani #newbeginnings."

Meanwhile, on the work front, the Union minister for women and child development has been recently given additional charge of the minority affairs ministry after the resignation of Mukhtar Abbas Naqvi.