Watch: No Social Distancing At BJP-Backed Procession In Covid-Hit Indore

Three cases have been filed against BJP leaders and workers in Madhya Pradesh after worrying visuals emerged of no social distancing at a huge procession in the Covid-hit district of Indore. 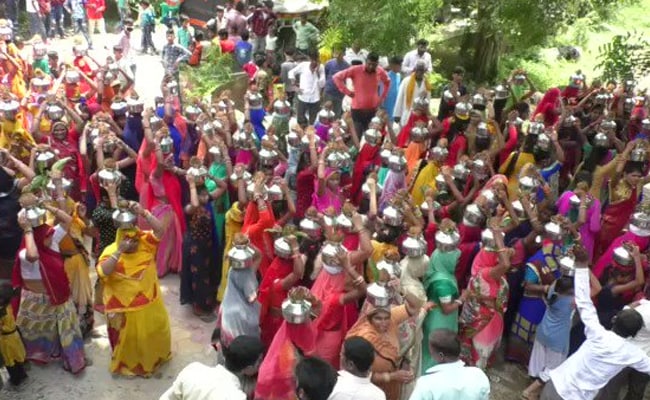 Social distancing norms were not followed in a procession organised in the Covid-hit district of Indore.

Three cases have been filed against BJP leaders and workers after visuals emerged of no social distancing at a huge procession organised by party members in the Covid-hit district of Indore in Madhya Pradesh, where bypolls for 27 assembly seats are due later this year.

The days long procession started on September 3 and was attended by thousands of people in Indore's Sanwer ahead of tomorrow's ground-breaking ceremony of the Rs 2,400 crore Naramda irrigation project. It will cover almost all the 250 villages of the constituency set to benefit from the Narmada river water.

Minister Tulsi Silawat, who had switched sides from the Congress to BJP and recently recovered from coronavirus in August, is a strong contender from the area.

Worrying visuals emerged of thousands of men and women wearing masks, many below their noses, but with no regard for maintaining the recommended distance of 6 feet have emerged from Indore - the state's worst-hit district by coronavirus.

Mr Silwat remained evasive when asked about the violation of Covid safety norms amid appeals by Prime Minister Narendra Modi. "The Kalash Yatra happened within the village... I will ask officers about what happened and order a probe," Mr Silawat said walking away.

Parallelly, the Congress has released a video alleging saris, coconut and pots used in religious ceremonies were distributed during the rally to lure voters. In this video accessed by the NDTV, those distributing the saris and those receiving them were not wearing masks.

Deputy Inspector General of police, Indore, Harinarayanchari Mishra confirmed that three cases have been lodged against BJP leaders, including district party chief and former MLA Rajesh Sonkar who organised the rally, for crowding at the rally and violation of Covid safety norms. “No case has been lodged against Tulsi Silawat,” the officer said.

Though 34 per cent of the state's ministers have contracted the highly contagious coronavirus till now, there has been no let up in the pre-poll activities that attracts large crowds.

On Tuesday, Indore reported almost 300 coronavirus cases - the highest number of infections in the state in a day, followed by Bhopal, Jabalpur and Gwalior. Indore has more than 15,000 coronavirus cases with about 400 deaths. Madhya Pradesh on the whole has about 77,000 cases with 1,609 deaths. Of the 20 deaths reported yesterday, six were from Indore, three each in Bhopal and Jabalpur.

Coronavirus testing is abysmal in Madhya Pradesh with 18,133 tests conducted per million people.