Jairam Thakur was seen performing the traditional dance form 'Nati' at a local arts and crafts cultural centre in Manali. 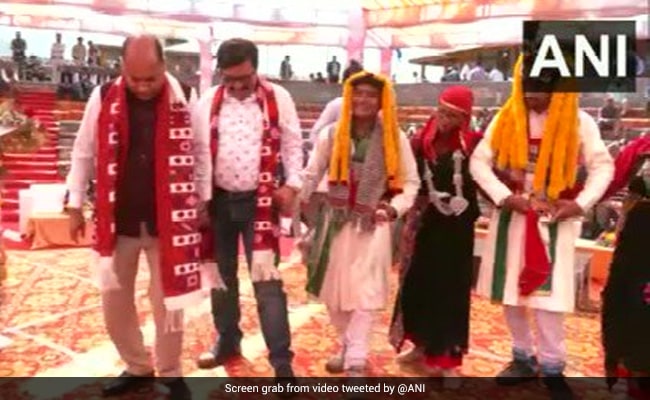 Jairam Thakur was seen shaking a leg with folk dancers.

A video - shared on Twitter by news agency ANI - showed the CM performing the traditional dance form 'Nati'. Mr Thakur was seen shaking a leg with folk dancers dressed in ethnic attire to the beat of several musical instruments like Dhol.

The clip comes two days after Jairam Thakur inaugurated and laid the foundation stones of 14 development projects worth about Rs 29 crore at Jenjehli in the Seraj assembly constituency of district Mandi.

According to ANI, the CM inaugurated the Community Health Center building, the Public Works Department's rest house and the Indoor Stadium at Janjehli. He also dedicated the Government Sericulture Center at Bagachanogi and Bio-diversity Park at Bhulah and Interpretation Center at Shaitadhar.

Later, while addressing a "Mahila Sammelan" at Dheemkataru, the CM stated, "BJP would again come to power in the state and the women would play a decisive role in this." "The women of the state would give huge support to the BJP due to the numerous welfare schemes of the present government," he added.

He also said that the State Government from the very first day of coming to the power had always worked for the welfare of every section of the society including the poor, weaker sections and women.