The TV series Ramayan, written, produced and directed by Ramanand Sagar, first aired on Doordarshan in 1987 and acquired a cult status over the years. 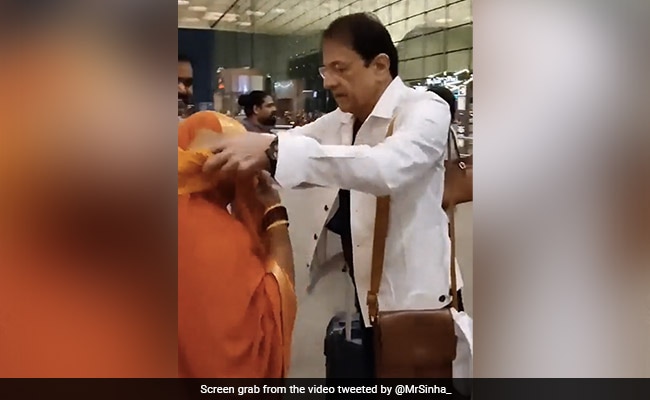 The actor had a brief conversation with the woman, despite his discomfort.

During the 1990s, Ramanand Sagar's Ramayan experienced tremendous success. The actors who played Lord Ram, Laxman, and Sita were well-known both in their native India and overseas. There are numerous accounts of people worshipping the actor in the same way they worship Lord Ram.

However, even decades later, the legendary show's appeal hasn't lost any of its charm. It has once again been demonstrated by a viral internet video. In the video, it is seen that Arun Govil, who played Lord Ram in the TV series, was recently spotted at the airport with a woman holding his feet and showing him reverence. As the video continues, the woman sits in front of him and is holding hands. The actor does have a brief conversation with the woman, despite his discomfort.

Since being shared, the video has amassed over 4.65 lakh views and more than 21,000 likes. More than 4,500 users reshared the post, and numerous users gave heartfelt remarks in the post's comment area.

The TV series Ramayan, written, produced and directed by Ramanand Sagar, first aired on Doordarshan in 1987 and acquired a cult status over the years.

In 2020, during the COVID-19 lockdown, the show was aired again after 33 years, and set a world record by becoming the most viewed entertainment programme globally. The re-telecast of the TV show started on Doordarshan National soon after Prime Minister Narendra Modi announced a nationwide lockdown to contain the spread of the novel coronavirus. DD National said on April 16, 2020, 7.7 crore people across the globe watched the show.