In the caption of the Twitter post, Erik Solheim compared the colour of Spiti Valley to the Red Planet Mars. 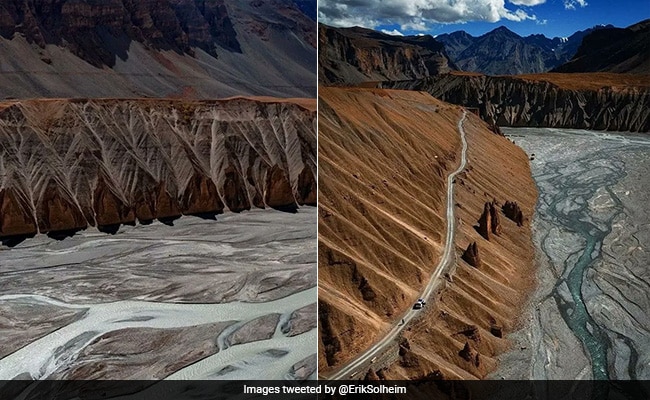 The post has garnered more than 4,400 likes and hundreds of comments.

The stunning images, which appear to be taken from a drone camera, show the textured and expansive landscape of the region. In the caption, Mr Solheim compared the colour of Spiti Valley to the Red Planet. "A ride in the Mars. Spiti Himachal Pradesh. Incredible India," he wrote on Twitter.

The Ministry of Tourism's Incredible India campaign also reshared Mr Solheim's post. "Thank you @ErikSolheim for sharing such breathtaking snaps from Spiti, Himachal Pradesh. The spectacular view of the brown Himalayas lining the swift Spiti river, is indeed a sight to cherish forever!" the ministry wrote.

A photographer named Raj Mohan also commented on the diplomat's post saying, "@ErikSolheim I appreciate you crediting the rightful owner. These are my photos randomly stolen from Instagram by @GoHimachal_FYI".

Meanwhile, this is not the first time that Mr Solheim has been left awestruck by the beauty of "Incredible India". Earlier this month, the diplomat shared a video showing Bangus Valley, located in the Kupwara district of Jammu and Kashmir.  The short video showed a clear-water stream rushing past a hilly meadow as horses blissfully grazed amid the lush green grass. "Incredible India! This heaven is located in Jammu and Kashmir, called Bangus Valley," Mr Solheim wrote in the caption.