Kerala rains: Three sirens were sounded prior to opening of dam's third shutter by around 35 centimeters, Kerala State Electricity Board (KSEB) said on its Facebook page. 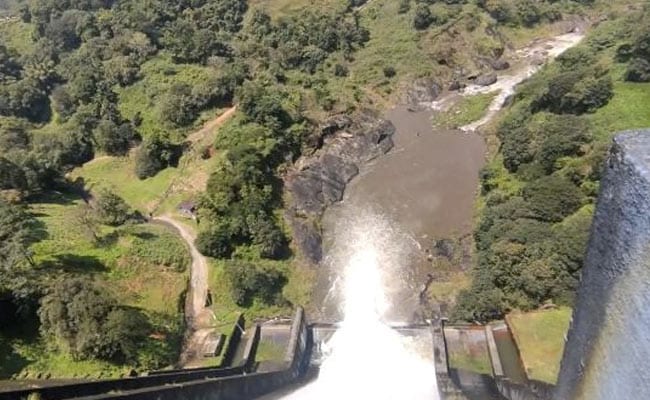 Three shutters of the dam are going to be raised by 35 centimeters each.

Loud sirens announced the opening of the third and second shutter of Cheruthoni dam, part of the Idukki reservoir, in accordance with the state government's plan to release small amounts of water from it as its levels reached the danger mark.

Three sirens were sounded prior to the opening of the dam's third shutter by around 35 centimeters, Kerala State Electricity Board (KSEB) said on its Facebook page.

Nearly an hour after the third shutter of the dam was opened, three sirens were sounded before the second shutter was raised by 35 centimeters at 12 pm, KSEB said.

Three shutters of the dam are going to be raised by 35 centimeters each during the day, it said.

Earlier in the day, shutters of Idamalayar and Pampa reservoirs were opened in the wake of an increase in the water level and more rains predicted in the coming days in Kerala.

The developments come a day after the state government opened the shutters of Kakki and Sholayar dams to release surplus water.

The Ernakulam district administration confirmed the opening of shutters 2 and 3 of the Idamalayar dam by 50 centimetres each.

The opening of shutters 3 and 4 of the Pampa dam by 45 centimetres each was confirmed by the Pathanamthitta district administration.

The state government today reiterated its warning to people living in low lying areas and along the banks of the rivers, whose dams have been opened, to exercise caution and move to relief camps set up across the state in the wake of the heavy rains which have claimed 38 lives so far.

State Revenue Minister K Rajan, while speaking to media this morning, said if people refuse to move out of risk-prone areas, the government would be forced to "arrest" and shift them to the camps.

Kerala Minister for Electricity K Krishnankutty, when speaking to reporters earlier, said the decision to open the dams has been taken in accordance with the rule curve which is based on the state's experience during 2018 floods.

The state government had on Monday announced that the Idukki dam, built across the Periyar river, Idamalayar in Ernakulam, and Pampa dam, in Pathanamthitta, were going to be opened today.

#WATCH | Kerala: Two shutters of Idamalayar Dam in Ernakulam dist opened for 50 cm each at 6 am today. Present water level of the dam is 165.70 m with the full reservoir level being 169 m & maximum water level being 171 m.

Even though rains subsided in several parts of Kerala on Monday, after receiving heavy downpour last week, the decision to open shutters of these dams was taken as water levels there had reached close to the danger marks and more rains were expected from Wednesday.

In view of the prevailing situation and expected worsening of weather conditions, the government has canceled pilgrimage to the Lord Ayyappa shrine in Sabarimala for the Thula Masam poojas.

According to the State Disaster Management Authority (SDMA), the number of rain-related deaths in Kerala from October 12 to October 18 stood at 38.

During the same period, at least 90 houses have been destroyed in the rains while 702 have been partially damaged.